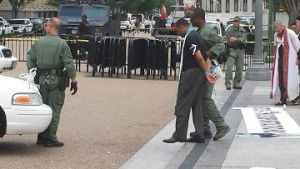 CWS President and CEO, the Rev. John McCullough was arrested July 31 as part of a protest to stop deportations (Will Haney  CWS)

Today, I have decided to risk arrest with more than 135 other faith and immigrant rights leaders outside of the White House. I have not come to this decision lightly, but out of my deep discontent and disappointment at the lack of action by our President to stop the needless deportations of millions of immigrants and the suggestion that our nation should expedite the deportation of thousands of Central American children who are fleeing violence and seeking protection.

As someone who has benefited from the courage and civil disobedience of the leaders of the Civil Rights Movement, I cannot stand idly by as I see unjust immigration laws damage our communities and our nation. It is a moral imperative that we take action now, particularly after the House Republican leadership has miserably failed to enact immigration reform that the majority of Americans roundly support. While I have been proud to stand alongside courageous Republicans like Rep. Jeff Denham, I do not believe that history will be kind to the dysfunction of this Congress and House leadership.

Meanwhile, the daily onslaught of close to 1,100 deportations continues to rip apart our families, congregations, and communities. And our President has the full legal authority and moral responsibility to put an end to this outrageous injustice. He literally could do it today with the stroke of a pen. But instead, President Obama has announced reviews (and then delayed them) along with vague suggestions of some executive action by the end of the summer – while continuing to needlessly deport tens of thousands more people.

We have heard recently in the L.A. Times – through a leak by the Administration – that the President is potentially considering administrative relief that could protect around 5 million people from deportation. These immigrants might be parents of U.S. citizen children or DREAMers. While we appreciate this hint of action that would bring welcome relief to many, this proposal is nowhere near enough. There are 11 million aspiring Americans – moms and dads, sons and daughters, brothers and sisters, workers and day laborers, community members and congregation leaders – who are in need of immediate relief and protection from our broken immigration system.

We are also extremely concerned about the Obama Administration’s apparent stance on rolling back important protections for the Central American children – perceived as a political trade to expand deferred action. This would cause immeasurable harm to thousands of children, deporting them back into the hands of traffickers, gangs and others who seek to exploit them. If we expedite the deportation of these unaccompanied kids, their stories and cases for asylum and protection will be gravely ignored. Rolling back anti-trafficking protections, as the White House has requested and Congress is trying to do would result in the United States playing Russian roulette with the lives of children.

We have grown tired of our decision makers putting immigrant families and children in the middle of their political games. Some Democrats are ready for the President to take this action prior to the November election hoping that this will help mobilize immigrant voters to the polls. There are also Republicans that cannot wait to bring about another lawsuit stunt against the President for this additional executive action, even though it is fully within his executive authority. Both of these calculations by political operatives lack moral vision, are short-sighted and deny the dignity and humanity of the more than two million immigrants who have been deported by this President. Our nation is better than this, and I pray that our President is as well.

Some might ask whether now is the right time to engage in civil disobedience outside the White House. The President has given a vague timeline and suggestion of some future action. But these nice sentiments and unfulfilled promises do nothing to stop the daily injustice of deportation after deportation. Ultimately, we in the faith community will not remain silent while millions of immigrants continue to live lives marked with fear and unrealized potential. This is why I am risking arrest today. As a pastor, a husband, a father, a CEO, and a man of faith, I must take part in holding our politicians accountable for the impact they have on the lives of my community members.

Today I bring my prayer for this country and my plea for this President to act into physical form, in front of the White House, a symbol of the power of this country and the promise of democracy. The restrictions of handcuffs pale in comparison to the desperation felt by so many of our immigrant brothers and sisters, as they seek lives free of fear and an opportunity to pursue the American dream. I cannot sit idly by. Mr. President, act boldly and act now. We expect nothing less.

CWS President and CEO, the Rev. John McCullough has been arrested as part of a protest to stop deportations