Depth of anger at the intensity of violence in Iraq and the rate at which it is spreading has prompted 11 organisations with roots in Christian and Muslim faiths to join forces and issue an urgent call for the end of what they called “horrific” suffering in Iraq.

The organisations that issue the call, 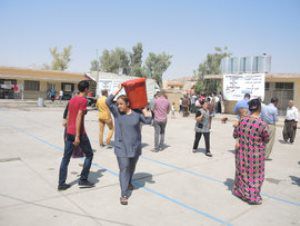 including ACT Alliance, decry the gross violation of human rights in the northern and western parts of Iraq, saying they could amount to war crimes and crimes against humanity.

John Nduna, General Secretary of ACT Alliance, an international network of nearly 150 churches and church-based organisations carrying out humanitarian assistance globally, said the situation in Iraq demanded the undivided attention of the world.

“There is an urgent need for immediate protection of civilians from further attacks, and up-scaled humanitarian assistance for the hundreds of thousands who are now refugees or internally displaced.”

The joint statement called for strict application of international human rights and humanitarian laws and international pressure at all levels of the United Nations, the League of Arab States and from citizens, governments and institutions of goodwill to urgently address the situation in Iraq.

ACT Alliance members and partners are delivering assistance in the Kurdish and Karbala regions, including Nineveh plain area in the northeast of Mosul. This assistance comprise of food and non-food items, psychosocial support, water, sanitation and hygiene.

The statement is endorsed by: