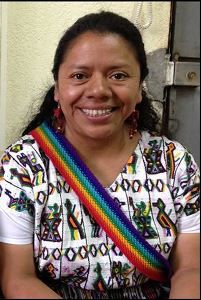 By Deepa Panchang and Jessica Hsu

As a member of the Mayan Women’s Movement which is a part of the Council of K’iche People, we have joined forces to generate action from the people, the community. We are in the midst of change where we are defining our needs, what actions we need to take, what power we have, what our way of looking at the world is. And to say no to corporations, while saying yes to life.

I am from the Western region of Guatemala, called Iximuleu in Mayan, in the department called K’iche. I am the spokesperson [of the Mayan Women’s Movement] and was elected at an assembly process where 87 communities and six rural and urban areas were involved. I have a mandate from the people, and explain the feelings of the women, the men, and the children. We must unmask false development and challenge the world powers involved, even though they might be Guatemala’s millionaires or the army. I have done so in political councils and they don’t like that. I have 21 charges against me where I am accused of just about everything: being noisy, conflictive, and much more. The latest is that I am a threat to national security, a terrorist of sorts.  I was [recently] sent a report saying that I’m under an injunction from Inter-American Commission on Human Rights. They want to take away my protective measures [IACHR Precautionary Measures] and send me to jail.

We have had huge mobilizations and have made decisions to not allow mining here. The companies are upset and they have done all kinds of things. But, still to this day they have not entered. We have stopped mining and hydroelectric licenses.

They want to exterminate us, but they will not be able to achieve it. We have a lot of energy, a lot of strength.

We are under occupation right now. We have been through many types of invasions but this is one where the main actors are transnational corporations. The world powers, in complicity with the national oligarchies, with the government, with the army, are like occult powers or organized crime. What is happening is that they are allowing transnational corporations to go in everywhere. These corporations include mining, hydroelectric, monoculture, megatourism, and infrastructure-building. These openings are like extended highways which allow the plundering and looting of our natural assets, including the water, the soil, the mountains, and the forests.

There are many transnational corporations from the Americas, like Goldcorp [from Canada]. There are also companies from other continents such as Enel from Italy, which generates energy using water. It‘s considered clean energy because it doesn’t use oil, but when they introduce these hydroelectric plants, they privatize the water in order to produce energy for other transnational companies and electricity, and none of it is for our communities.

The free trade agreement [CAFTA] that was signed with the US is really gaining momentum. There are projects deemed as “national emergencies” which enable them to enter our territories without our permission and with the whole army. They are using the mass media in order to say that the US is helping Guatemala with its security issues. They are training the army which then persecutes us because we are the main enemy of the erroneously-called “world development.”

In our language, in K’iche, we don’t have a concept of development. That word does not exist. Instead, we have the concept of “life” which is a harmonious relationship between human existence, nature, and the cosmos. We respect the principle of tzcat, which means reciprocity. You are me and I am you. What we now need, existentially, is to give one another energy, not take it away.

That’s why we talk about reciprocity: we must consider women’s force and men’s force.

Patriarchy is very much alive. The movement is working on this because it is crucial to have more harmonious relationships. The violence suffered behind closed doors can prevent us from going into the public and saying no to the mining or to the hydroelectric plants. It takes away strength and power from us. The person taking away that power is our own spouse!

We have also been talking about complementarity. Collectively we bring strength, but we need to complement the collective with personal work, using the strength we have. Women generate much strength within the community and the community generates strength in women.

Our coming together has also empowered our claims as Mayan people. The outward expression of oppression is that we are “little Indians,” “ignorant,”“bare-footed Indians,” “poor people,” or that we have nothing to offer. In claiming that we are Mayan people, we are generating power. It’s a process which has led us to say, “We are no longer going to repeat processes and powers that are racist, colonizing, excluding, capitalist, patriarchal. Instead we will create change because we are against the looting and the false development which has been sold to many people.”

Another concept we use is Ut’z Kaslemal, to “live well,” and to live well is not to accumulate. It is not wealth, it is not profits, nor is it monetary funds.  Mainly it is about how we can live with one another, co-exist. Men and women are not owners of the resources. We only take from nature what we need. Our model is clashing with the accumulation model – the fake development or macro-economic model – and that’s why we are harshly persecuted.

One of the things we also need to do is lose our fear. We have been very scared of the oppressor and we all carry that fear inside. I’ve been accused of being a guerilla, a wild woman. They say, “How does she dare speak up?” We need to get rid of the fear this creates. We have healing processes where we get together as women and see what is oppressing us. These processes are liberating, re-embracing the spiritual.

We have learned other ways of thinking and other ways of feeling through connecting with our neighbors, women we did not know. We have also had processes of how to start to break with capitalistic economic models. There are other ways of sharing which are not necessarily capitalist. We connect art, science, and spirituality. Then we share the experience in schools and girls are empowered where they dare to say, “Well, if our mothers are speaking, so can we.”

We have to get more connected to other sisters in our own country who are still under oppression. Yes, we are working on it, supporting other women so they can reciprocally support us, so that we don’t feel like victims, but rather protagonists.