Some 47,000 illegal child and adolescent migrants have been caught by United States migration authorities, many coming from Honduras and El Salvador. Hundreds who are caught before getting into the US are deported every day, by land and by air and a massive wave of further repatriations is expected.

Authorities cannot cope with the huge number of returnees. In response, the Honduran government has declared an emergency and ACT Alliance members on the ground have stepped in to support deported migrants and their families during the crisis. ACT is working with repatriated migrants, trying to track down family, supporting the children in a refuge and trying to address the mental scars of the children’s perilous journey and often, exploitation en route. The causes of the migration are numerous.

“The route to the US is extremely hazardous,” Murillo says. “People put themselves in the hands of ‘coyotes’, traffickers who take people northwards. Many are captured by authorities or worse, by criminal gangs, and the migrants routinely suffer awfully. Thousands die. But the risk of the journey still appears less dangerous to people here than the risk of staying, the risks of everyday life here.

“In the neighbourhoods around San Pedro Sula, people’s employment opportunities are very low. Poverty is quite extreme. In Rivera Hernández and Chamelecón, gang-related violence is endemic, large areas are controlled by the gangs, housing is evacuated, businesses are extorted, girls and women are frequently raped and the violence is the highest in the world. San Pedro Sula is the most violent city in the world.”

ACT members work in the worst of these areas on social programmes to provide support to young people and families, and work with the government on emergency issues, including this crisis of migrants. The real issue, however, isn’t that migrants are being deported, it’s that they feel the need to leave the country and to risk their lives on the journey, Murillo says.

At the reception centre for repatriated migrants, ACT is providing both equipment and furnishing for the refuge and staff and volunteers for the centre to support the minors. “Many arrive crying, traumatised by events that have happened during their attempt to reach the US. Many are in great distress.”

Not all children are picked up immediately. It sometimes takes days to contact family members in poor rural or urban areas around Honduras. Sometimes it’s weeks and in some cases, family simply cannot be found and the children need to be looked after for however long it takes. It is common for families to have to travel from remote areas of the country to pick up the children, often at a cost they cannot afford.

ACT helps track down families, and pays for the bus fares of those who can’t afford it. The children receive psychological support and a ‘mother’ is assigned to them while the refuge searches for their families. The children and their families get food, both in the refuge and for a few days after the pick-up.

While some support and comfort can be provided to the migrants and their families, the underlying causes of the migration remain: poverty and violence. 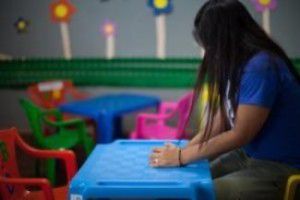