Paulo Ueti, Anglican Alliance Regional Facilitator for Latin America and the Caribbean, reports here on a workshop with indigenous women in Gambia, Colombia, to facilitate learning on economic empowerment and gender-based violence through Contextual Bible Studies.

“After 500 years a woman is now the main leader of the Ancestor Governor Body of our land.” With this testimony we started the meeting on Contextual Bible Studies, gender-based violence and economic empowerment in Gambia, Colombia. Supported by Episcopal Relief & Development, Trinity Foundation organized a meeting with 30 people from the Misaka Indigenous community and surroundings.

I joined Revda. Elineide from the Anglican Service for Diaconia and Development (SADD) in Brazil, to facilitate the process, which was shaped as a circle of words, experiences and challenges. The workshop took place on 11th-13th August 2014.

The group started by building an altar in the center of the room, offered by the Christian Alliance of Indigenous community of Guambia, Silvia de Cauca, Colombia. A tapestry made by their own hands was settled in the center.

First they were asked to share their views as to what purpose the Bible serves. The results were very enlightening: to remind us the true way to live nowadays; as a tool to solve conflicts and live as brothers and sisters; to teach, correct and heal into a better life; to learn justice; to build community; to set free from slavery and oppression and violence; to lead us to stop violence and build peace; to edify communities and persons and guide us on the path; and to build confidence and empower the poor, especially women and children.

The group spent two days on the journey with Tamar, King David’s daughter, who was raped by her half brother, with the collusion of male relatives. (2 Samuel 13:23-39) In small groups the following questions were posed: “Who are the main characters, and what do we know about them?”; “What is the role of each of the male characters in the rape of Tamar?”; and “What does Tamar say and do?”

Having done this, and having shared their readings with one another, participants brought their conclusions to the plenary. After this, in groups, they discussed: “Do we know women like Tamar in our church and/or community?” This was not to identify individuals, but to discuss whether the issue of gender based and sexual violence is a reality in their context.

After sharing in plenary, they were invited to engage with Tamar. “What do you say to Tamar?” They responded: “It is not your fault. We are with you. Let’s denounce it. God is with you and so are we. Let’s be organized within ourselves so it will never happen again.”

Later in a circle the group shared what they learned from the study: to be supportive, to be aware about children and their relationship with the men around them, to start women’s groups to discuss their rights and violence, denounce violence, never be silent again, and seek justice and better relationships.

Following a study of the persistent widow from Luke’s Gospel (Luke 18: 1-8), the group realized how important it is to be public and to uphold justice for those vulnerable and suffering injustice. People organized together will change the structures of injustice, poverty and violence. And certainly, they said, this widow was not alone at the judge’s front door. It is a challenge to overcome the culture of privacy, even within the indigenous community, but this is a the path we need to follow: to not be silent and not allow ourselves to be silenced. It was a good lesson learned from the widow.

The workshop ended with meeting with a sacred prophet, a widow and her son, in 1 Kings 17. The relationships among them taught them to assess where the resources are to end violence, poverty and inequality. The extraordinary outcome from visiting this Bible text is to learn that confidence in your own resources and in the relationship established with some partner (the prophet in this case, on behalf of God himself) can bring about solutions to poverty; not starving and not being afraid anymore.

Sharing and building confidence in their own resources and in the community is where the key lies to changing the life of everybody in that story. More of that can be done nowadays as well.

The workshop finished with this vision: May God keep us strengthened and faithful to peace, reconciliation and bonded to the struggle against inequality, violence and poverty as a community and the Body of Christ here and now. 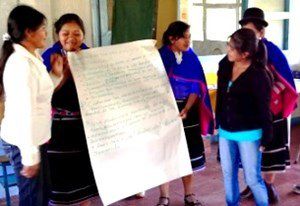