The killing of peasant activist Margarita Murillo on Tuesday raises questions about the motive behind her murder. At the moment, all that is known is that she was shot on her land in the village of El Planón (municipality of Villanueva), Honduras by three individuals wearing ski-masks. As the recently-named president of the Asociativa Campesinos de Producción Las Ventanas (Las Ventanas Peasants Production Association).

Mrs. Murillo had apparently been involved in negotiating a land dispute between her group (consisting of at least 23 peasant families) and a large landowner (or several landowners) in the area. None of the news reports by the Honduran media regarding Mrs. Murillo’s death have yet delved into the specifics of this land dispute and the likelihood that it may have provided a motive. Mrs. Villanueva had received several death threats, and her 23-year-old son, Samuel, had been kidnapped from his home by soldiers on July 26.

Land disputes between peasants and large landowners in Honduras go back decades. Agrarian reform has been perhaps the most contentious issue for any Honduran government to deal with since the 1950s and 1960s, and certainly the biggest challenge. On the one hand, you have tens of thousands of poor campesino families that do not have access to land, while a few hundred individuals control huge parcels of land. An estimated 70 percent of Honduran campesinos have no land, while about three percent of the landowners own the most fertile lands. This situation has grown worse during the past two decades, primarily as a result of neoliberal trade policies designed to spur economic growth at the expense of balanced development. Prior to the 1990s, only about 50 percent of campesinos were without land.

The following is an excerpt from an article by the Council on Hemispheric Affairs (COHA) titled “Human Rights Violations in Honduras: Land Seizures, Peasants’ Repression, and the Struggle for Democracy on the Ground”. It provides a reference point for when the land situation in Honduras really started to go from bad to worse.

“By 1993, 44 percent of the rural population was either landless or owned less than a hectare of land. In the context of the wave of neoliberal policies that spread throughout Latin America in the 90s and under the presidency of Rafael Leonardo Callejas, the Law for Agrarian Modernization (Ley de Modernización) was passed in 1992. This law transformed land into a typical commodity of a liberalized market in which supply and demand dictate the distribution of land rather than state intervention. Contrary to previous efforts at reducing the latifundio (large estate ownership) the new law, as part of the package of the structural adjustment policies of the 1990s, led to the transfer of collectively-held land to the market and to increased concentration of land. Transnational companies began to buy lands (often through coercion) from the reformed sector to expand banana and palm oil production. The media, mostly owned by the landowners and businessmen, supported the narrative that the agricultural sector was going to increase its productivity in the hands of businessmen. In short, the Law for Agrarian Modernization “radically altered the structure of land-tenancy, as well as the rationale for land reform.”

Neoliberalism is an economic theory that carries the idea of free market capitalism to an extreme. Free the market from the bonds of any regulation from government, and watch the magic happen. The problem is that the “magic” under this economic system usually only happens for those who are already wealthy, influential, and thus powerful. Unfortunately, this characterization does not apply to the vast majority of the Honduran people. So for them, neoliberal policies simply aggravate their already-difficult struggle to survive.

In much the same way as “trickle-down” economic theory (“the principle that the poor, who must subsist on table scraps dropped by the rich, can best be served by giving the rich bigger meals” ―William Blum) is responsible for dramatically increasing income inequality in the United States since the 1980s and gradually eroding the once-great American middle class, neoliberalism has made the rich richer in Honduras, and the miserably poor infinitely more miserably poor… to the point where they have no choice than to fight back merely to survive… physically survive. The rural poor in Honduras have been organized and fighting for their land rights for at least a half century. The difference now is the fight is more desperate.

Problem is that when the weak fight back, the strong tend to come down pretty hard on them. Ruthlessly. Margarita Murillo may have been a victim of this dynamic. It is an explosive situation whenever — numerically — there are many more people who are weak and hungry than those who are fat and strong. Theologian John Shelby Spong once observed, “You can’t have a world where 50 percent of the people are dieting and 50 percent of the people are starving if you want stability.” In Honduras, the percentage of people starving is much worse. 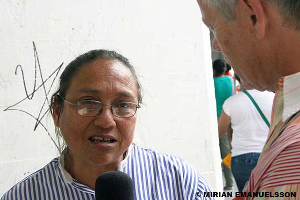