The Archbishop of Canterbury yesterday concluded a four-day visit to Anglicans in Brazil and Chile, part of his series of visits to Anglican primates worldwide.

The Archbishop is visiting all his fellow primates around the Anglican Communion during his first 18 months in office.

In the Brazilian city of São Paulo the Archbishop met and prayed with local bishops, clergy and lay people. He also preached at Most Holy Trinity Parish, reflecting on the theme of his visit – ‘I am the vine… if you remain in me you will bear much fruit.’ (John 15.5).

While in Brazil the Archbishop also addressed local ecumenical leaders about the importance of ecumenism and inter-religious dialogue for the Anglican Communion.

In the Chilean capital, Santiago, the Archbishop attended a special service in which the province officially changed its name to the Anglican Church of South America. The service was one of thanksgiving for Allen Gardiner, the man who founded the South American Mission Society and sacrificed his life as one of the continent’s first missionaries.

The Archbishop also attended a special event with Chilean religious, social and political leaders, where he spoke on the role of faith in the development of society, and preached at a parish Sunday morning service in Santiago.

Bottom: The Archbishop of Canterbury with the Bishops of the Anglican Church of South America (ACNS) 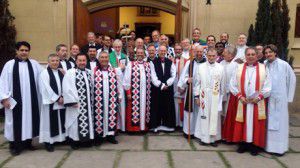