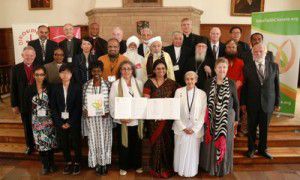 As hundreds of thousands of people flooded through the streets of New York City on 21 September in a march for action on climate change, 30 faith leaders representing nine religions signed their names to a statement calling for concrete actions to curb carbon emissions.

The document was the centerpiece of an interfaith conference jointly hosted by the World Council of Churches (WCC), a body that includes 345 churches representing about 560 million Christians worldwide, and Religions for Peace, an interfaith coalition with members in more than 70 countries. Signatories hailed from 21 countries on six continents.

“When in January I listened to the general secretary of the United Nations, Ban Ki Moon, calling the world’s heads of state for a summit on climate change, I thought we also have to get together as leaders of faith communities to offer our contributions,” said Rev. Dr Olav Fkyse Tveit, the WCC general secretary. Large changes require “deep and strong conviction” which, he said, can be found in the “beliefs, rituals, symbols, sacred texts and prayers of faith [that] give meaning and direction for a large portion of the world’s population.”

The statement, titled Climate, Faith and Hope: Faith Traditions Together for a Common Future will be presented to the deputy-secretary general of the UN, Jan Eliasson, in advance of the UN climate summit that is set to begin on 23 September.

It calls on “all States to work constructively towards a far-reaching global climate agreement in Paris in 2015” which will be “ambitious enough to keep temperature from rising well below 2° Celsius; fair enough to distribute the burden in an equitable way; and legally binding enough to guarantee that effective national climate policies to curb emissions are well funded and fully implemented.”

As faith leaders who together represent a huge swathe of the world’s religious adherents, “if we change, everything changes. So we have to commit ourselves,” said Rabbi Awraham Soetendorp, founder of the Jacob Soetendorp Institute for Human Values in The Hague, the Netherlands. “The march is visible. What we are doing here is visible. The march and the signed documents together make an impression,” he said.

“Although there is always the emphasis on the beyond, on the eternal life, we are extremely eager for earthly life for people,” said Archbishop Demetrios of the Greek Orthodox Archdiocese of America. “Climate is a central issue for human life. So we have to try as a church to ensure the best possible conditions.”

For some of the signatories, climate change is threatening the very countries they call home. The nation of Tuvalu sits on a small collection of reef islands and atolls in the Pacific Ocean. Salt water has entered the underground water table on which the people rely, and scientists suggest the islands will eventually be subsumed as sea levels continue to rise.

“For my church, this means life, because our very existence is challenged. And anything that challenges the livelihood and the life and life continuity of a people is a mission from God to us as believers to fight against it,” said Rev. Tafue Lusama, general secretary of the Congregational Christian Church of Tuvalu (EKT).

Yet, he said, he didn’t want Tuvalu to become “a symbol of defeat” for other low-lying countries that may eventually face the same fate. “If we can stand our ground and tell the world they should do something and act on it now, even if Tuvalu goes down, we can save the others,” Lusama said.

In the face of the crisis affecting the world, it is imperative for people of faith to speak out in hope, becoming a moral voice that speaks “to our deepest convictions and commitments as human beings,” said the WCC general secretary. “I say it is immoral not to speak of hope in this time.”

“I see a lot of hope, even just these three days,” said Christiana Figueres, executive secretary of the UN Framework Convention on Climate Change, who spoke to the gathering during a morning session. “There’s the public mobilization that we’re seeing today, corporate mobilization that we’re going to see, and the political mobilization. It is a very encouraging sign that people are standing up to be counted. Yet it is not enough. We have to build on that to get to the final solution.”

“We cannot despair, said Sheikh Abdallah Bin Bayyah, president of the Forum for Promoting Peace in Muslim Societies in Abu Dhabi and co-moderator of Religions for Peace. “This hope is our address. This is where we live.”

Statement from the Interfaith Summit on Climate Change 2014

To save the earth, all must change their ways, says Ecumenical Patriarch (WCC news release of 19 September 2014)

WCC’s work on climate justice and care for creation