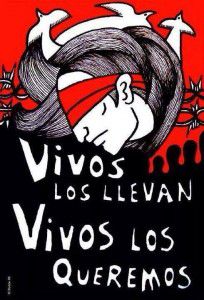 A message from Mexico’s Student Christian Movement “MEC por la Equidad” (original text in Spanish can be found at http://blogs.united-church.ca/unwrappingdevelopment/2014/10/statement-on-ayotzinapa-from-the-student-christian-movement-mec-for-equality/

This past Sept 26, we, the students of the Manuel Isidro Burgos Rural Normal School in Ayotzinapa: we were assassinated, kidnapped, tortured and many of us remain disappeared, by the municipal police of Iguala, Guerrero. We say “we” because the education students are not “other:” we are all of us. We are ourselves.

In this attack, municipal police killed six people; they wounded 17; 43 students were kidnapped in police patrol cars and to this date they remain disappeared. Because of this and within a logic that is contrary to the fatalism of “what can we do about it?” 56 families from the community of education students in Guerrero and from broad sectors of Mexican society, went out together to the streets to demonstrate in many places around the world, with our hearts disrupted and indignant because of the violence that we suffered at the hands of the State which, in a systematic form, attacks life and human rights.

As a consequence of this massacre, Raúl Vera, bishop of Saltillo, said that the Mexican State was sending us a message of warning to all who refuse to accept helplessness, impunity and the abuse of power to which we are submitted: we will be criminalized, disappeared, tortured and assassinated.

We write, but we do not write because we do not achieve justice. Even with our bodies inundated with pain and anger, because many days after those events and with sufficient proof to arrest the guilty parties, the State has absolved itself of its duty to protect us, trivializing the brutality of that disaster in calling it “an isolated event,” and delaying information and procedures.

Even though our struggle always seems like a retreat, we manifest our solidarity with the families of the dead, tortured, disappeared, and with all the students of the education school in Ayotzinapa. We declare our repudiation of such events and our opposition to these policies of the State, and we join the demands that the disappeared by returned to us alive.

We write, but we do not write because we do not achieve peace. We make a call to Mexico, to the international community and to all people who profess a faith, to be attentive to the “signs of the times,” remaining firm in solidarity and in hope as we face the realties of our society.

Mexico’s Student Christian Movement (known in Spanish as the Movimiento Estudiantil Cristiano MEC por la Equidad) is made up of young people from various Christian traditions, most of whom are theology students and pastoral agents. It is an ecumenical effort that seeks to gather new critical thinking and action with regard to our social, political and economic environment. Aware that Mexico is confronting serious problems of violence, MEC for Equity is working on themes related to the humanitarian crisis from the perspective of building a culture of peace.

The United Church of Canada supports the World Student Christian Federation and its various regional expressions (including the one in Latin America/Caribbean).

Photo: Alive they were taken We want them Alive (MEC Equality Mexico)