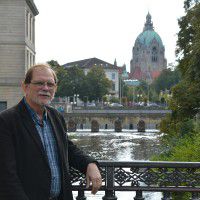 “The thief comes only to steal, kill and destroy. I came that all may have life, and have it abundantly” John 10:10

Greetings in the name of the God of Life!

I decided to write my first letter as general secretary to you, a member of the World Communion of Reformed Churches, one month into the job. It was worth the wait because my first month has been filled to overflowing with inspiring examples of how the WCRC is “Called to Communion and Committed to Justice.”

There has been a smooth transition in leadership thanks to the generous and constructive efforts of our outgoing general secretary, Rev. Dr. Setri Nyomi. We give thanks to God for the 14 years of his ministry with the WCRC and wish him all the best as he returns to Ghana to take up the challenges of congregational ministry.

With the move of the office from Geneva to Hannover and a new general secretary this has already been a year of tremendous transition. WCRC President Rev. Dr. Jerry Pillay has called us to move from transition to transformation and despite tremendous challenges represented by shifting the office and staff from one country to another the Communion continues to move forward.

The Global Institute of Theology gathered young Reformed-family theologians from around the world in Costa Rica to deepen their sense of the global challenges and opportunities of our tradition’s theological contribution to the ecumenical movement and the world.

Constructive, important and practically-oriented ecumenical dialogues are underway with the Roman Catholic, Anglican and Pentecostal communions and communities. Churches struggling with church dividing issues are seeking the support and help of the Communion to accompany them so that we live out the truth that nothing can separate us from the love of God and that therefore separation between and amongst us is to be avoided and overcome.

Ecumenically we have been asked to be part of the World Council of Churches Reference Group on the Pilgrimage for Justice and Peace. We are accompanying the Latin American Council of Churches in their restructuring. And we are partnering with the World Student Christian Federation as a key for forging inter-generational alliances.

Four regional events have been held marking the 10th anniversary of the Accra Confession, each making critical contributions to a major global consultation on the Accra Confession to be held in Hannover in November. There are signs of some of our regions reinvigorating as they think, act and pray together, stressing both unity and justice. We are soon to launch a worldwide campaign to confront the sin and horror of human trafficking, planned for Lent 2015.

The active Partnership Fund is hard at work to help churches meet their diaconal and mission challenges in their own contexts, financially supported by the whole family. This includes support in times of catastrophe and disasters.

There is hardly any of the world crisis spots today where our members are not directly involved, either as those effected by political, military, social, religious and economic violence and conflict or as those whose governments and states are involved as part of the problem. WCRC plays an increasingly important role in connecting our members through prayer, solidarity, advocacy and public witness to speak the truth and work for transformation. As one example, WCRC is accompanying the Presbyterian Church in Colombia in their effort to support the peace and reconciliation process in that country.

An update of our website is on the verge of being launched to help make the resources of the past and the news of the present more accessible and useful to all. Communion requires communication and we are making a priority to find better ways to communicate with each other and so to be better able to support each other in solidarity, advocacy and prayer.

All these things and many more mean that we are on the move!

The challenges are enormous. The world situation frankly could hardly be worse. The global overarching reality is that the planet and the people created by the God of Life are in the grips of systems and structures that inflict death and destruction at the expense of the many for the benefit of the few. Our context mirrors Jesus’ words of the thieves that come to “steal, kill and destroy.” In that context we confess the one who came so that all may have Life Abundant. In Accra we confessed that our faith requires us to be committed to overcoming injustice and addressing directly all forms of systemic and structural injustice and enslaving powers. We confirmed that vision and commitment in Grand Rapids while strengthening the vocation to our unity as a communion.

We are moving towards our General Council in Erfurt, Germany, in 2017. If our confession of Life Abundant is to have any meaning to those millions upon millions of people caught in the web of death and destruction and to have any meaning for the whole of God’s creation, then we must embrace the prayer and theme of our 27th General Council with great urgency and faithful determination: “Living God, Renew and Transform Us!” The “us” is inclusive of both church and world. In the spirit of the Accra Confession we seek the renewal of the church for the transformation of the world….so that all may have abundant life.

The 2010 Uniting General Council determined that the next GC will have an equal number of men and women delegates and that there would be a meaningful number of youth delegates. For many of our churches this means including more women and youth in the designated leadership, decision-making and representational structures of our denominations now so that by 2017 we will not only have equality in our GC meeting, but we will have renewed ourselves toward the full and equal participation of men and women and youth in our Communion worldwide.

The gift of communion means many things spiritually and practically. In all these things it is the commitment and disposition toward koinonia—a common and diverse identity and the sense of being one body that thinks, acts and prays together. In order to act together the whole family must support the work of the Communion, and the Communion must make itself relevant in the daily life of the churches and their congregations. We are not yet where we need to be with either of these two challenges. The WCRC needs greater support from the members in terms of regular and full payment of membership fees and in terms of regular communication and participation in the actions and common life of the WCRC. At the same time the WCRC has a long way to go to communicate and offer the connections, support and vision that is truly relevant to our members on all levels: local, national, regional and global.

The good news is that we are moving…not just from Geneva to Hannover but to truly embrace our life together as “Called to Communion and Committed to Justice,” an urgent response to a world where the thieves come to steal, kill and destroy, and Jesus comes so that all may have life and have it abundantly. The Family of Congregational, Presbyterian, Reformed, United, Uniting and Waldenesian Churches is moving to mobilize our churches to make even greater contribution to the one ecumenical movement in a context where inter-religious cooperation is essential for the sake of the whole inhabited earth.

I cherish your prayers and support as we together embrace the gift, the challenges and the promise of our Communion.