Nevertheless, according to the leaders of campesino women’s organizations who gathered for the International Day of Rural Women on October 15, as the land parcel size increases, the number of women-owners decreases.

The Inter-agency Commission on Gender (CIG), promoted by the United Nations System in Nicaragua and composed of non-governmental organizations and bilateral agencies, has conducted various forums nationwide this year to put on the public agenda the findings of the Index for Economic Empowerment of Rural Women in Nicaragua, introduced in September 2013 during the Conference on Human Development and Capabilities Approach. This index “measures the ability of women at home to make decisions about what and how to plant, raise animals and influence in collective participation spaces,” say the organizers of the events, held since March in three departments in the north and west of the country: Nueva Segovia, Estelí and León.

“This collective effort works toward the empowerment of rural women and the fulfillment of Law 717 [approved in 2010], the Law Creating the Land Purchase Fund with Equity for Rural Women, ordering the state to allocate 1 percent of the budget for the purchase of land for women who request it, but to date has not included them in it,” said María Teresa Hernández, who heads the Rural Women´s Coordinating Group, one of the organizers of the empowerment forums.

This year the civil society organizations working for the rights of rural women have formed an alliance supported by the CIG to promote the exchange of successful experiences, the analysis of the indicators from the aforementioned index in various contexts, and the fight for Law 717.

“Indeed we have succeeded for the first time in forming an alliance of organizations working with rural women, to fight for the enforcement of Law 717 and exchange experiences from the strengths of each organization. We must make connections between us, because it is not the same for the women who have spent 21 years in this like Xochilt Acalt, as for women who have spent two years,” said Mertze Brazo, the leader of the Xochilt Acalt Center for Women.

“Owners and ladies of their farms”

During the forums, were shared the results of women´s empowerment experiences of the Between Women Foundation (FEM) of Estelí, Xochilt Acalt de Malpaisillo (León), and of the Leadership Institute of Las Segovias (Nueva Segovia). 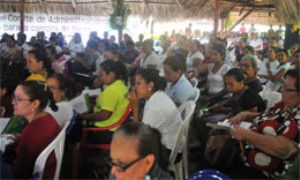 “The first time a compañera in our cooperative took home nearly 50,000 cordobas (US$1,923) as a result of her work, she couldn’t believe it, because it’s a sum that she’s never have in her life. She couldn’t believe it because we’ve been so separated from money, and money has been managed by men, the gender-based division of labor is absolutely an economic relationship because work for us doesn’t have the [monetary] value as it has for men,” said Isabel Zamora, a member of FEM.

One beneficiary said the achievements spurred by Xochitl Acatl transformed women into “owners and ladies of their farms,” because in addition to owning land, they decide how and what to invest the money earned from their farming, which has changed the behavior of their children and partners, who support them with at-home tasks.

During the forums, a study on women’s empowerment in the Municipality of Muy Muy, Department of Matagalpa, in northern Nicaragua, was released. Coordinated by the United Nations Development Program (UNDP), the document states that “39 percent of rural women in the municipality of Muy Muy are empowered, compared to 75 percent of men.” The research found that women of Muy Muy seem to be more empowered than women in Ghana (Africa) and Guatemala, where the study was also conducted.

“The effort to build the index of empowerment of women in agriculture was a methodology that was developed internationally and was being tested in countries like Guatemala and Ghana, which are those that we look at comparatively, strictly abiding by the methodology they applied, although it is not always wise to make comparisons because the contexts are different, so we can hardly say that we are better or worse than these countries,” explains María Rosa Renzi, coordinator of the Human Development Unit of UNDP Nicaragua. “However, what the study showed was that in Nicaragua, women have a higher level of empowerment.”

This study provides “a vision of the situation of rural women´s empowerment” and therefore, “is for self-reflection and assessment to identify in which areas progress is being made and with what limitations, and based on that, propose how to fill the gaps towards the empowerment of women,” Renzi said.

The index also helps assess to what extent the actions of public policies or of a women’s organization are contributing to the empowerment and economic autonomy of women.

“Remember that this is one of the major objectives of the Millennium Development Goals, therefore it is a global commitment undertaken by governments to assess whether or not there has been progress in empowering women,” said Renzi.

For the Leadership Institute of Las Segovias, “these rates are extraordinary, but this measurement must include the issue of identity, as we are seen in the role of mothers. Women in the business world, we are not recognized for the work nor the scale to which women care for the family; women’s reproductive life favors the capitalist system.”

The forum of Malpaisillo, held in early October called “The land and other assets, vital for the empowerment of rural women,” was organized by Xochilt Acalt, the Women and Community Development Foundation, the Maria Elena Cuadra Movement and the Rural Women´s Coordinating Group. It had the support of a number of organizations including the Leadership Institute of Las Segovias, Nicaragua Entrepreneurs Network, Points of Encounter Foundation, the Association of Producers and Exporters of Nicaragua and the CIG.

At the event a statement was read for the Nicaraguan population “who lives and depends on rural production, on the agricultural activities performed by women in food production,” noting that “it is vital to make changes in the way we think and act based on how we understand development in the field, which has not yet focused on people, much less on women. We need to invest in the countryside, invest in women, but invest what is necessary so we have access to resources, to tools for production like land, credit, technical assistance, seeds, technologies, markets, education, health, housing. The State has an obligation and duty to do so.”

Photo: Rural women in Nicaragua demand access to the resources and means for production, like land (Sergio Cruz Latinamerica Press)