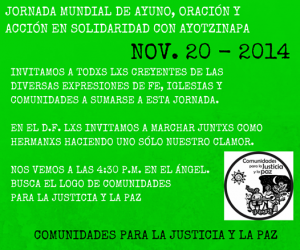 Statement of the Chiapas Ecumenical Network regarding the disappearance of the 43 teaching students from Ayotzninapa, Mexico

Learn to do well. Seek judgment, relieve the oppressed; judge the fatherless, plead for the widow. Isaiah 1:17 (KJ21)

We are men and women from different denominations and civil society organizations, as part of the Chiapas Ecumenical Network.

We send our Greetings of peace in the midst of a national situation full of violence, forceful disappearances, organized crime “allowed by our own governmental authorities,” apathy and indifference from some religious and political sectors, denounces and statements from civil society, Non-Governmental Organizations and from different religious experiences.

On September 26th, 2014, students from Rural Teaching School “Raul Isidro Burgos” on Ayotzinapa, Guerrero, Mexico, were attacked by municipal police from the counties of Iguala and Cocula.  In the attack, three students as well as three other civilians died, twenty-five people were injured and forty-three were taken against their will to places not revealed even until the present time.

On November 8th, 2014, 42 days after the killing of the three teaching students and the kidnapping of the other 43, Jesus Murillo Karam, Mexico’s Attorney General, held a press conference where he made a report to the media about the killing of the students by drug trafficking organizations on September 26th and 27th.

The information shared by the Attorney General was not only rejected by the families of the 43 students, but also by international and national civil organizations because the proof offered by authorities is not convincing because of the inadequate technological instruments used in the investigation or even waiting for the results of an independent investigation held by a team of Argentinian forensics.

Based on these events, as perpetrated by organized crime and the non-convincing declarations from the authorities who were responsible for the deaths and the disappearances, the Chiapas Ecumenical Network declares that governmental efforts have not been enough and we invite every citizen, regardless of religious and political affiliation to join in protest and request to the authorities to deal with the issue with justice and transparency.

We denounce every act of conspiracy between authorities and criminals.  Mexico doesn’t have to suffer from innocent bloodsheds and forced disappearances.

We pray to God for the Ayotzinapa students’ families, stating that, even though human justice seems to be so distant on these lands, Divine Justice will come to who want to overshadow the investigation process.