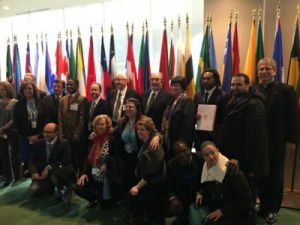 UNICEF, the United Nations Children’s Fund, this week invited 20 of its major partners from the private sector and civil society to commemorate the 25th anniversary of the adoption of the Convention on the Rights of the Child.

The meeting was an opportunity for a key group of major UNICEF partners to engage in dialogue with Nobel prize-winning economist Joseph Stiglitz on the theme of equity and children’s rights, explained the WCC in a statement issued from its headquarters in Geneva on 21 November.

Tveit said in his presentation: “To believe that God created all of us means also that God wants all children to continue to be sustained and for them all to have the same opportunities.”

He cautioned, “To ignore the rights of girls and boys, and to accept inequalities among children, is to ignore the peace and justice of God.”

The WCC general secretary noted, “As churches we offer access to education and health care. We preach the practice of love and attention. But there is much that needs to be done in our faith communities.

“Therefore, we also need to commit to the rights of children – and to work with international partners like UNICEF.”

At the end of the meeting with UNICEF, Tveit concluded: “When we look at the obstacles to justice and peace we are addressing as WCC today, armed conflicts, climate changes, economic injustice, domestic violence and others, we have to say that they are particularly dramatic for the children of the world today. To address them from the perspective of children and their rights, we get a deeper and even more relevant understanding of why we have to address them as churches and people of faith. If we are called to bring signs of hope, we have to do so for the next generations and their future.”

On the 25th anniversary of the Convention on the Rights of the Child, the State of the World’s Children report presented an agenda for change.

The United Nations General Assembly adopted the Convention on the Rights of the Child in 1989. Since then, advocacy for advancing child rights has made immense progress. There has been a huge reduction in the numbers of children dying before the age of five, and there is increased access to education and clean water.