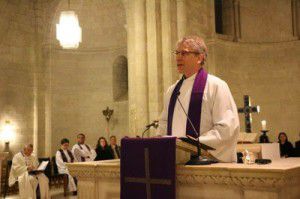 A water crisis for Palestinian people was highlighted by the general secretary of the World Council of Churches (WCC), Rev. Dr Olav Fykse Tveit, at the launch of the Seven Weeks for Water campaign in Jerusalem.

The WCC’s Ecumenical Water Network (EWN) invited its member churches and supporters to reflect on water during Lent which began on Ash Wednesday, 10 February.

Tveit, who was visiting the Holy Land, said, “We heard today the voices from Palestine with regard to the water crisis, that, the most vulnerable communities have available as little as 20 litres of water a day per person.”

Speaking in the Lutheran Church of the Redeemer in Jerusalem, Tveit noted that the 20 liters is just one-fifth of the minimum required by the World Health Organization (WHO) which recommends 100 litres a day per person.

Tveit cited Bishop Dr Munib Younan, president of the Lutheran World Federation, who has contributed to this year’s Lenten reflections for Seven Weeks for Water.

Younan said, “The water crisis in my community gives this reading from the Book of Revelation special significance for us today. The city the author describes is a ‘New Jerusalem’, where water flows freely along with healing, peace, and justice for all.

“But as I sit in my church office here in Jerusalem, I know very well there is no such river flowing through the city.

Tveit said that a water advocacy group in Palestine, EWASH, reported that, on average, Ramallah, the capital of the Palestinian Territory, receives more rainfall than London.

“However, the average per capita water consumption in London is 150 litres a day compared to that of only 70 litres a day for an average Palestinian.

“On the other hand, the per capita consumption for Israel is 300 litres a day,” observed Tveit.

He said that 80 percent of the ground water from Palestine’s mountain aquifer is pumped all the way to Israel and the Palestinians are left with only 20 percent of the available water.

“Some communities in the West Bank have to pay up to two thirds of their income in buying bottled water, which is the only option.  This is unacceptable!” said Tveit.

Also present at the service were Younan and Archbishop Dr Antje Jackelén of the Church of Sweden.

Leaders of the WCC, Middle East Council of Churches and local churches participated in the launch ceremony.

Biblical and theological reflections and resources for the seven weeks will be based on the water crisis in the Middle East and take into consideration issues of justice and peace.

Since 2008, the EWN has provided weekly theological reflections and other resources on water for the seven weeks of Lent and for World Water Day on 22 March.

”And we are still thirsty for water!”, Reflection for the first of the Seven Weeks for Water 2016

Full sermon by Rev. Dr Olav Fykse Tveit: “Thirst for Justice: A Pilgrimage of Justice and Peace in Palestine”