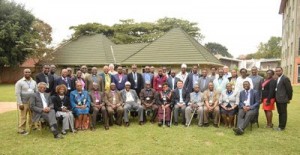 Participants at the Africa Pre-Conference of the Conference on World Mission and Evangelism, arrived in black clothing on 14 September to act in solidarity with the worldwide “Thursdays in Black” campaign.

“What a better way to commence the third day of the Africa Pre-Conference of the World Mission Conference with a powerful biblical reflection offered by Fr Evangelos Thiani on the need for our churches and ecumenical movements to be proactive in leadership mentorship as it was the case with Elijah and Elisha,” Lesmore Ezekiel posted on the participants Facebook page.

The pre-conference is organized by the WCC and the All Africa Conference of Churches (AACC).

The Moderator of the World Council of Churches (WCC) Central Committee, Dr Agnes Abuom invited all delegates to observe a moment in active solidarity and participation in the global Christian social campaign to combat violence against women.

She brought greetings to the Pre-Conference on behalf of the World Council of Churches and she spoke of, “a world that is free of rape and all forms of gender related violence.”

Rev. Dr. Lydia Mwaniki, director of AACC’s Theology, Family Life and Gender Justice Department spoke about her work at the conference in a talk titled Gender Justice and Dignity – Transforming Discipleship in Africa.

The pre-conference is intended to prepare African inputs to the WCC Conference on World Mission and Evangelism (CWME) Africa in Arusha, Tanzania from 8 to 13 March 2018.

It is expected that at the pre-conference papers will be presented and published into a book on the conference theme and distributed to the participants in Arusha, as part of the conference information pack.

Commission on World Mission and Evangelism