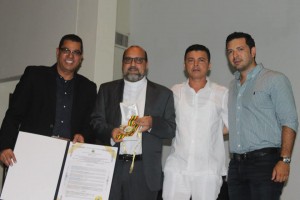 Rev. Milciádes Pua holds the medal received, along with municipal authorities and the Rector of the American College, Adriano Portillo (UniReformada)

Barranquilla`s District Council awarded on October 24th the Barrancas de San Nicolás medal to Colombia´s Presbyterian Church for their evangelizing work on education, along with the American College and the Reformed University Corporation, in the framework of the 500 years of the Reformation.

This award was promoted by the council Juan Camilo Fuentes Pumajero, from the Conservative Party, and was received by the American College´s principal, Rev. Adriano Pontillo, and by Colombia´s Reformed University´s Academic vice Rector, Rev. Milciades Pua, whose interview with DIPAZ we present:

What does this evangelizing work consist of?

It came from the Presbyterian Church´s missionary work as a project aimed at solving a fundamental social problem, that being that a lot of children, especially in Barranquilla´s centre, were out of school or working on the public markets with their parents. That´s when a school is created so that those kids could study. At first it was called “American´s College” (Colegio de los Americanos), but now it´s called “the American College” (el Colegio Americano).

Can any one study there, independently of their religious beliefs?

Yes. In fact, when the school was founded more than 128 years ago, a lot of people who were normally not accepted on Catholic schools, like single mothers` or divorced parents` children, were accepted [in the American College]. The school was characterized by its open nature, even to Arabic, Palestinian, and Jew colonies. There has always been religious teaching, but with one characteristic: it was never thought with proselytism in mind, but with biblical strengthening of the mayor ethic and moral teachings.

How come the University´s participation in the work that the American College have been doing?

In 2002 the Reformed University Corporation (the College´s continuation into higher education) came to public life, following the school´s values: inclusiveness in all aspects, economic, religious, gender, sexual diversity, and ethnic like afro descendants. The idea is to transform with education.

How does it feel to receive such a distinction?

It was very good and we were very pleased to receive it. It recognizes years and years of work. The University and the College have never hidden their Christian calling, but they are not proselytist, given that they aim to provide an educative service that helps people change.

Have you received any other distinctions?

Yes, in the Church´s 150th anniversary the Council awarded us the Cruz de Boyacá. That happened in 2006.

Given the present times and the need for helping one another, do you plan on allying with any organization?

Have you considered going past the frontiers with this labour?

Yes, of course. Actually we are the founders of a continental platform consisting of higher education protestant and evangelic institutions from Latin America and the Caribbean, QONAKUY, quechuan word meaning “to bring your best to share”; and the coordinator is RUC´s rector, Helis Barraza.

First of all, continue with what we´ve been doing with greater encouragement and knowing that society has recognised our work through its institutions, the same way the government and the mayoralty has done. We also want to keep this equilibrium of kindness and accessibility, and prioritizing a principle we all share: make people go from less to more, from being excluded in an economic and educative sense to being people who play an active role on this country´s transformation