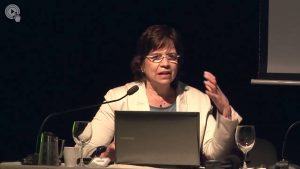 “You have an email”, the question that was the title of a famous Hollywood film launched in theatres in 1998 is already old. In 25 years the world of technological mass media has changed so much that email addresses are now only one tool between a millard of other possibilities that are granted to us by online communication and social media. Nonetheless, a simple email address in the beginning of the 90s was a completely innovative and effective medium, and one of high technical quality that broke the frontiers of geography, time, and distance, and in our area of work and interest it marked an infinitude of possibilities to connect and transmit information, knowledge, opinions, and journalistic investigations.

Even though journalists and communicators, between other professionals and academics, had already started to use emails on their day to day work, this tool reached wide visibility during the Eco ‘92, the UN world conference on Climate and Development, also known as the Earth Summit, held in Rio de Janeiro, Brazil in 1992. Beginning with civil society organizations, worldwide communications organized itself trusting in these new technologies and their whole installation and openness of their use during the conference was handled by activists and technicians from these organizations, between them the Association for the Progress of Communications (APC).

The churches and ecumenical entities participated widely during this Summit, where they also experimented the use of communication technologies to position their initiatives and compromises for the integrity of the creation, a fundamental language for the ecumenical speech of that time.

Let’s remember that the 90s marked the growth of an active ecumenism in the latin american region, with the participation of numerous churches and ecclesiastical organizations that favoured the interdenominational dialogue and the possibility of working with a larger presence on themes that were starting to take an important role in the regional agenda. The ecological question, women’s and indigenous peoples’ rights, a bigger insertion of the work towards human rights and justice and peace in countries and areas of conflict, fueled a strong presence of churches and their leaderships in political and civil fields that started to recognize them as social actors with a presence and opinion on the public sphere.

The circulation of publications of ecumenical character has grown these past years and the officials published by churches and organisms were added to dossiers, theological notebooks, primers with popular communication formats, and informative bulletins, between others. The diffusion was also enriched by the movement of communitary radio stations that gave place to the boom of initiatives throughout the region, in which the communicators of christian churches were not absent.

In WACC Latin America these changes and new challenges were being reflected, as well as the concern shared with other ecumenical organisms about the necessity of counting with a medium that strengthens the visibility of ecumenical action and the churches, a professional medium that was able to cover the whole continent and reach both secular media and the ecumenical and ecclesiastical publications and media providing information, spreading opinions and make the ecuenical compromise surrounding the political and social realities of communities and countries known.

The concern grew and urged us which is why it’s no coincidence that many years after the release of the movie, we asked ourselves: “Do you have an email?” Of course we had! he answer, that originated with the strength and clarity during a meeting in Quito with with members of the leadership of the Latin American Council of Churches (CLAI), Lutherans in Communication (LUC) and WACC-AL,found us well positioned to give birth to one of the most innovative and blunt initiatives of the regional ecumenical communication. With good support and many certainties, we began down the path to create the ALC Agency, whose work I presided until the year 2000, with the valuable collaboration of the editor Fernando Oshige, from Peru.

With recognition and gratitude I remember the first group of correspondents with whom we plannified tasks and trained in the headquarters of the Scientific Peruan Red, in Lima. The enthusiasm and our view of what we could expect in the world of communications had no limits. And here we are 25 years later after having risen above all expectatives and with the certainty that in 1995 we went down a path open to technological advances without leaving behind the primary message of announcing the good news of Jesus, of compromise with the vulnerable, of work towards the justice, democracy and peace in our societies during always troubled and demanding times, on which the rights to communication continue to be a primary axis on the call for the dignity of people and social, political and economical inclusion of all with equality and without discrimination.