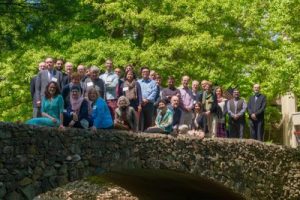 The public is invited to the seminar’s opening session on 11 June at the Ecumenical Centre, which will feature lectures by professors Rosalee Velloso Ewell (Redcliffe College), Tuba Işik (University of Paderborn), and Azza Karam (United Nations and Vrije Universiteit Amsterdam).

The rest of the seminar, which will be held at the Ecumenical Institute in Bossey, will offer an international circle of 30 scholars the opportunity to engage in close reading and dialogue on the topic of freedom—between humanity and God, different religions and politics, personal conviction and public order, and between individuals— exploring the historic role of faith communities in addressing freedom.

Building Bridges was first started in 2002 by the Archbishop of Canterbury.

Each year there is continuity in the group, as well as new invitees, in order to gradually extend the Building Bridges community but also develop a sense of a continuing, coherent conversation among a community of scholars who have gradually come to know and trust each other.