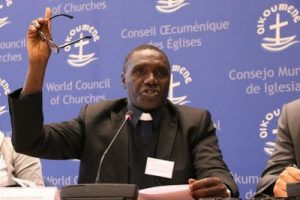 WCC-South Sudanese church leaders continued to amplify hope for their country, as the people quietly marked the 8th Independence Day, without an official government celebration.

The world’s newest nation which became an independent state on 9 July 2011, is facing enormous challenges including insecurity, economic stagnation and famine due to a new conflict. The conflict broke out in 2013 as a political dispute between President Salva Kiir Mayardit and his deputy-turned-rebel Riek Machar Teny. Within weeks, it spread to all parts of the country.

“The common voices in the streets are that of discouragement and hopelessness, knowing that you cannot change the hearts and minds of the political leadership,” said said Fr James Oyet Latansio, a Roman Catholic priest who heads the South Sudan Council of Churches as the general secretary.

“In this inflated context and situation in South Sudan, we keep and trust in the word of God in what the church keeps reminding the faithful and people of South Sudan about the hope in the lord,” he added.

The UN estimates that within five years, the conflict has killed an estimated 400,000 people and displaced at least 1.9 million inside South Sudan. As a consequence of the war, an estimated 6.4 million people in the country are facing extreme hunger, according to the Norwegian Refugee Council.

With conflict badly affecting their congregations, the churches have been moving into action.

“The church in South Sudan through the South Sudan Council of Churches Action Plan for Peace is continuously beating the drum of hope for peace, healing, forgiveness and reconciliation,” said Latansio.

In September 2018, the government and opposition groups signed the Revitalised Agreement on the Resolution of the Conflict in the Republic of South Sudan. A key highlight of the pact was a ceasefire agreement, a development that raised hope for an end of the long-running conflict.

According to Latansio, broadly there is an apparent sense of calm due to the ceasefire, which so far is holding and many of the signatories to agreement are in Juba (the capital) trying to work on their hopes as they implement the accord.

Church officials say the economic situation is very dire, with prices in the market reaching the roof due to inflation. Civil servants, organized forces, the army and security personnel have not been paid for months, risking security in both the country’s rural and urban areas.

*Fredrick Nzwili is a freelance journalist based in Nairobi, Kenya