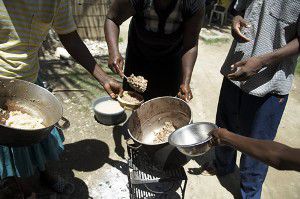 Haiti is a country in the Caribbean; sharing an island with the Dominican Republic. For the past two years, Haiti is facing an unprecedented political crisis that is having the worst impact on the most vulnerable and least wealthy people. With a population of approximately 12 million people, around 49% of the population are facing some sort of food insecurity, right now; 2.58 million are in severe food insecurity, according to the National Coordination for Food Security. It is very alarming, and not much is planned to address this issue.

A series of scandals, mismanagement, disasters and corruption led to this difficult situation.

The earthquake that happened in 2010 brought the country in its knees. Haiti lost 120% of GDP after the earthquake. Even with enormous aid and other support, and great solidarity with the remittances systems (primarily Haitians living abroad, contributed 0.9 billion in 2009 to 3.4 billion dollar a year in 2018), the situation has improved somewhat.  But not enough to create the sustainable traction the economy needed to move forward.

After a series of crises, like the cholera epidemic, minor hurricanes and flooding, Hurricane Matthew hit Haiti hard. The country lost around 24% of its GDP because of that major crisis. The total of aid, production and remittances wasn’t enough to make the economy start again as it should. In 2019, the international aid to Haiti is less than 1 billion US a year including support from INGOs; compared to an average of 3 billion a year for the last 3 years, from remittances alone.

More than 5 million people are facing very difficult times, and a few require cash transfers from relatives living aboard to survive. Most of the population who are living in rural areas, have been affected dearly. Some decided to leave their communities to live in the cities, and some others, particularly the youth, emigrated to the traditional location of the Dominican Republic, along with new exodus areas like Chile (more than 115,000 in two years) and Brazil (more than 50,000 in 4 years).  Many of those have since made their way to countries in Central America on their way to the USA. According to Professor Serge Jacob, the level of unproduction is around 79%, because of the crisis.

The way the crisis is manifesting itself is alarming. For the last 18 months, the radical opposition has been asking for the president to leave power because they said that the president and his party members were involved in a big corruption scandal with Petrocaribe funds. Various actors are asking the judiciary system to address this issue, however, the President is perceived to be controlling the system, so the outcome may not be legitimate or accepted.

The radical opposition has repeatedly taken to the streets with thousands of protesters to ‘lock’ the country, paralyzing business and day-to-day lives. Haiti has experienced 5 major ‘locks’ in the last 2 years: (one week in July 2018, 2 weeks in November 2018, 2 weeks in February 2019, 2 weeks in June/July 2018 and three weeks in September 2019).  When the country is locked it has the worst impact on the most vulnerable, who live day-to-day, often from commerce on the street, often live in the most impacted areas without safe places to shelter, and cannot afford to stockpile food and water in their homes.  At the same time, there is serious devaluation of the gourde (HTG): the local currency lost 32% of its value compared to the US dollar, resulting in a decrease in tax revenues of more than 20% for the last 12 months and an inflation of about 19% over the past 12 months.  This impacts the poorest of the poor the most.

With this recurring crisis, many development and humanitarian actors have continued to provide basic services to the population, in hospitals, schools, support for agricultural production, construction of houses, training at different levels in both urban and rural areas, but with many difficulties. With that, we would like to express our sympathies to the organizations that have been affected by the unrest in the country such as damages to assets, thefts of materials, and losses of life. We would like to thank all the organizations that have continued to work in the vulnerable and poor areas of Haiti, to help the people.

All those indicators are signs of a major humanitarian crisis that will affect Haiti for at least the next 3 to 5 years. Some politicians are taking advantage of the poor youth to incite (and in some cases, pay) them to perpetrate hate crimes on rival politicians, the middle class population or anyone who seems to be less miserable, and some institutions. Around 40 private enterprises and 30 public offices have been burned down during the September unrest, buildings with seemingly no connection to any political parties nor the president parties, including schools.  The human rights organization RNDDH mentioned that 17 people were killed, and more than 180 people were injured, during the last 3 weeks of September 2019. This rhetoric could escalate to a more dangerous type of crisis, if the violence escalates, such as when local populations decide to strike back against the violent ‘protestors’ coming into their area.

Two collaborative local partners are doing a monitoring of the situation and have shared their reports on a regular basis: RNDDH and MISSEH. MISSEH, which is part of the international network of Religions for Peace, which is an interfaith group composed of Protestant, Catholic, Anglican, Voodoo and Bahai sectors in Haiti. They have been contacted by the president to play a mediation role in the current crisis. However, the opposition party rejected the call for dialogue

The CORE group formed by the EU, Brazil, USA, France, Canada and the UN, called the parties to meet and start some dialogues for a smooth resolution of the crisis. For now, all the parties rejected the dialogue saying it is too late to start a dialogue with a corrupt government.

After the huge protests last Friday the 4th of October 2019 passed without major violence, it showed most of the population, youth groups, universities networks, religious leaders are asking for the parties to find a solution; particularly the President and his allies. It may be good for the Presidency and his government to acknowledge the scope of the crisis and try to work with the opposition parties and other sectors for preparing a better governance plan for the coming weeks and months. People’s lives have been lost, particularly journalists and youth; the crisis needs to stop and the political actors should take their responsibility and find solutions to the problems, sooner than later.

Haiti is on the verge of a humanitarian crisis if a solution is not found in the coming months.