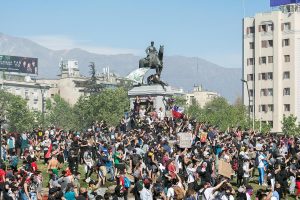 (LWI) – Lutheran church leaders in Chile have issued a call for peace in the current context of unrest and violence. Condemning acts of violence, they are calling on the Chilean government to address underlying inequalities.

A state of emergency was declared in Santiago de Chile following violent protests against rising living costs in the country. The unrest, which was sparked by a rise in metro fares, reflects anger over high costs of living and increased inequality in the country.

The Lutheran World Federation (LWF) has two member churches in the country, the Evangelical Lutheran Church in Chile (IELCH) and the Lutheran Church in Chile (ILCH), whose leaders spoke out earlier this week, repudiating the acts of violence. They urged the Chilean government to investigate and address the root causes of the ongoing violence and unrest and called on civil society in the country to work together for peace.

Investigate and address the root causes

This “is not just a protest against the increase of cost of public transport, it is the protest of tired and outraged people in the face of so many abuses,” wrote IELCH Bishop Izani Bruch in a pastoral letter to the church.

“There is an underlying malaise in the population that must be analyzed in a serious and deep way by the authorities of our country, to solve the problems and abuses that have been occurring for several decades and that generate discontent,” wrote Bishop Alexis Salgado and Church President Walter Dümmer of the ILCH, in a statement.

The Lutheran church leaders called on other Chilean society leaders to initiate a dialogue that would lead to unity, address underlying problems, and set the country on a path of justice and social peace.

“We reaffirm our commitment to participate and promote a society which has, at community and social levels, public policies that promote justice, peace, equity, reconciliation and the common good in our country,” wrote IELCH bishop Bruch.

“We ask for peace for our country, we ask for unity among Chileans to face not only the immediate but also the underlying problems that generate suffering,” wrote ILCH’s Salgado and Dümmer.

LWF General Secretary Rev. Dr Martin Junge, who is himself from Chile, said that “difficult and shocking as this is, there are underlying causes that contribute to this eruption of social rage: inequalities and injustices experienced by the people of Chile. Let this be a time to address the root causes. Violence is not the way to solve the issue.”