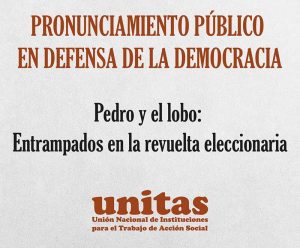 Warnings had been sounded about possible irregularities in the organisation and conduct of the national elections, given the failure to observe the Principle of Legal Security, understood as the objective application of the law so that people are aware of their rights, guarantees and obligations and all acts by organs of state are seen as reliable and predictable.

A clear deterioration in democracy and its institutions was already noticeable, given the failure to observe the Principle of Independence and the evident subordination of the Supreme Electoral Tribunal (TSE) to another organ of state.

Multiple dissenting voices were being heard, both within and outside the governing party, and especially among the wider Bolivian society from the East to the West of the country, in response to the failure of the Plurinational Constitutional Court (TCP) to observe the Principle of Constitutional Supremacy when it allowed Evo Morales Ayma and Álvaro García Linera to be re-elected indefinitely, giving preference to the Inter-American Convention on Human Rights over and above the four articles in the Constitution of the Plurinational State which do not permit indefinite re-election. By giving priority to the TCP’s ruling, the Electoral Authority failed to respect the result of the Constitutional Referendum held in 2016, in which the Bolivian people rejected the proposal to modify Article 168 of the Constitution and 51 per cent voted No to the re-election of Morales and García Linera.

The deep exhaustion of a process of change that refuses to change was already perceptible, given the failure of the State to observe the Principles of Transparency, Honesty and Trust. Instead, the so-called “process of change” is aggravating the polarization of society, clientelism and the co-opting of those who previously rejected a model of governance that is now reproducing itself with ever-improving aptitude in ignoring and nullifying the will of the people – both pro-government voters and those that support other political parties.

A number of different events had been piling up, but the trigger that made democracy in Bolivia crack happened on Sunday 20 October, at 19:40, when the Supreme Electoral Tribunal published the figures from the Transmission of Preliminary Electoral Results (TREP) system when the vote count stood at 83%, indicating that there would be a second round pitting Evo Morales against Carlos Mesa. At that point the vote count was suspended, and 24 hours later the TREP figures were updated showing that with more than 90% of the votes counted, the voting trend had shifted and the MAS looked to be the outright winner. The Electoral Observation Mission of the Organization of American States (OAS) described what had happened as “inexplicable”, while the European Union expressed “serious doubts” about the TSE’s electronic vote count. Citizens flooded the streets in protest, electoral tribunal buildings were set on fire, and there was widespread damage, clashes between opposing groups of citizens and the use of force by the police.

The celebration of democracy that took place on 20 October when the Bolivian people flocked to the ballot boxes to fulfil their duty as citizens and exercise their right to vote, was marred by the
questionable actions of the Supreme Electoral Tribunal, confirming the institutional lack of respect for democracy that has characterised it in recent years.

The citizens of Bolivia neither accept nor trust the results of the recent election and are willing to mobilise to demand respect for the will of the voters and their rights. The feeling that fraud has been committed is reinforced by the speeches given by the governing party declaring victory for the MAS party and denying any possibility of a second round, even though the partial results indicated that a second round would be inevitable.

Therefore, the National Union of Institutions for Social Action Work, in defence of democracy and the state of law: