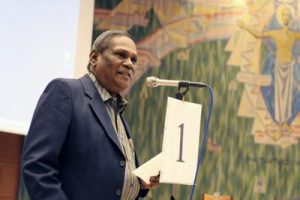 WCC-The World Council of Churches (WCC) global fellowship expressed its sadness upon the passing of Rev. Dr Augustine G. Jeyakumar, on 31 October in Chennai, India. Jeyakumar was the executive secretary of the United Evangelical Lutheran Churches in India, director of Gurukul Lutheran Theological College and Research Institute, and the treasurer of the National Council of Churches of India.

Jeyakumar, an ordained minister of the Arcot Lutheran Church, served for many years as a leader of the Lutheran churches in India.

“I wish to comfort the bereaved family of Rev. Dr Jeykumar, who has served his church and his Lord and Savior, and goes from here in faith and hope,” said WCC general secretary Rev. Dr Olav Fykse Tveit. “We give thanks to God for his life and work.”

Tveit had met Jeyakumar several times, and commended his leadership among Lutheran churches across the world. “We celebrate the life of a fine leader from the Lutheran world,” said Tveit, who added his prayers to those who will search for Jeyakumar’s successor.

A funeral service was held on 1 November in Chennai, and the burial took place on 2 November in Kilkavarapet, Jeyakumar’s home.