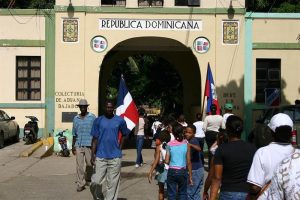 The General Context in Haiti:

The crisis in Haiti is becoming a real issue for all Haitians at all levels. The country is under lock-down, so goods and people have not been able to circulate freely for the last two months. Schools are closed; bank only open when it is possible, and some hospitals are providing limited services. A few have even closed because the doctors and nurses aren’t able to come to work – and even when they can, there is a shortage of medicines.

It is in this context that people, including opposition parties and some civil society groups from across different sectors continue to ask for the President to leave resign. For instance, opposition parties and some parts of civil society are calling for him to resign. Other groups are offering new alternatives for the next steps and are recommending a period of transition.

The President has made three interventions during the last four weeks, but these have triggered more demonstrations and negative reactions on the streets and in the media. Meanwhile, the US is asking for the parties involved to agree to an unconditional dialogue to seek a resolution to this crisis. For now, this call has been rejected.

The Situation between Haiti and DR

All this political uncertainty has had repercussions for is having knock-on effect on the Dominican Republic (DR), which shares an island with Haiti. The DR is progressing into a middle-income country while Haiti is still the poorest country in the region. The Income Gini Coefficient (is a statistical measure of distribution developed by the Italian statistician Corrado Gini in 1912. It is often used as a gauge of economic inequality, measuring income distribution or, less commonly, wealth distribution among a population. Measure of the deviation of the distribution of income among individuals or households within a country from a perfectly equal distribution. A value of 0 represents absolute equality, a value of 100 absolute inequality.) for the DR is 47.2 (2013, World Bank) while it is 59.2 in Haiti (2013, World Bank).

The Dominican Republic is experiencing some challenges for its next election; however, they have managed to cope with this situation with limited protests. These are among the elites from the political parties but largely followed by the general population.

The total economy in both countries is $8.7 billion a year in Haiti and $63 billion in the Dominican Republic. Along the Haiti and DR border, there are 14 official Binational Markets; not taking in to consideration some other selling points. These markets serve an average of around 182,000 people a day: 52% Haitians and 48% Dominicans.

The Dominican Republic currently exports more than $1 billion a year to Haiti. However, because of the lock down, all the official markets at the border are not working as before, and open inconsistently. The flux of merchandise and “Madan Sara” women sellers have reduced a lot. A few markets have managed to ship some goods to some cities in Haiti, but not on the same level as before. Meanwhile big lorries from the DR have not managed to cross the border, as they used to.

Some Madan Sara have managed to buy and find a way to provide goods to some cities, however, the volume of the transactions has been reduced significantly. For instance, the mayor of Dajabon has declared that instead of collecting their usual 200,000 pesos($3,922usd) a day, his district has only managed to collect less than 50,000 pesos ($981usd) a day. “According to the Comendador (west) Merchants and exporters Association, trade in that area has been practically nil, hurting productive sectors of the country.” The DR “has lost out on over $37.7 million dollars trade with Haiti” after the last two month, September and October 2019, according to Dominican today, am online media group.

This situation has created the emergence of a small mafia, with some people smuggling petrol from the DR to Haiti, as well as other goods. They are buying a gallon of petrol for around $4usd and they are selling it for $15usd in Haiti.

Some Dominicans have recorded voice notes on WhatsApp expressing their panic and sending very disturbing information. For instance, one said: “Haitians are having a Revolution in Haiti, burning houses, blocking roads. The Haitian President is about to leave power soon. Some Haitians will try to enter the DR and ask to have one country on the island and have the revolution.”

These kinds of messages are creating some panic for some people who don’t understand the dynamic between the two countries.

During a conversation with a colleague in Santo Domingo, one colleague she pointed out that this kind of behaviour may arise from how the Haiti’s history has been taught at school in the DR. As the Dominican Republic got their independence from Haiti, some Dominican literacy and history books sources of literature present the Haitians as a nation that could or would try to come back and unify the island.

It is clear that from discussions with Haitians living in DR, this is not at all an idea that still crosses the Haitian mind these days. The main objective of the revolution in Haiti, now, was not reunification with DR: it is a call for the resignation of the President (and also most of the population doesn’t trust much the active opposition parties as well) so that the country can change to one with more transparency, much less inequality, more freedom and more opportunities for all, not just for a few, according to a Christian Aid partner organisation, in Haiti.

In response to the situation, the DR government has sent more than 10,000 soldiers to the border, in addition to what they have already. Furthermore, the Ministry of defence and interior had to make a public announcement in order to prevent any more panic and raise people’s confidence about their capacity to contain any threat of invasion or mass migration from Haiti to the DR.

This crisis is making it difficult for some Haitians who came to the DR during the crisis. A few came and have already registered their kids at school in Santo Domingo. They are looking for possibilities to get their residency, which could cost around $2,000. Others who cannot afford this amount would prefer to renew their stay in the country monthly and pay the equivalent of $50.

That would mean for now, there are some people who managed to come to the DR legally and there is no indication there will be mass migration.

However, there have still been deportations during the last two months. According to Christian Aid’s partner GARR, more than 75,000 Haitian migrants repatriated in 1991 from DR to Haiti. For example, there was another smaller peak between 2003 and 2004 when more than 37,000 returnees were counted.

But the biggest waves of massive repatriations of Haitian migrants are recorded from August 2015 to today. In fact, between July 2015 and December 2018, more than 295,946 people were registered: 155,201 returnees and 140,745 spontaneous returns to Haiti from the DR. This number also includes more than 4,746 unaccompanied minors. It should be noted that this figure gives only an idea of the extent of the phenomenon, but it is not exhaustive since, during the same period, there are thousands more people who have not been registered for various reasons. And unfortunately, massive repatriation operations continue in 2019 with an average of more than 6,000 people per month.

In its office in Belladère alone, from January to December 2018, GARR welcomed and assisted 2,465 repatriated, expelled or spontaneously returned persons, following the threats met in the Dominican Republic. Of this number, there are 2,198 men, 92 women, 170 boys and 14 girls.

For the last two months (September and October 2019), GARR recorded around 6,000 deportations a month. Even though the Dominican government has the right to carry deportations in their country, they need to do in a way to respect the migrant rights. In the protocol signed between DR and Haiti, the DR government supposed to send the lists of the names of the migrants to be deported and the repatriated people should be handed over to the Haitian authorities during the work hours, in Haiti. During the last two months, it didn’t happen like that, according to GARR. Even the Civil society organisations working at the border areas had difficulties to support the deportees as they can

Some Haitian leaders in DR are continuing to do their best to inform the media and the Dominican population about what is going on in Haiti. An interview with Mr Edwin Paraison; the Director for Fondasyon Zile (an organisation working on issues in Haiti, in DR and binational issues as well) has been broadcasted and shared on social media as well.

Most of them are requesting the resignation of the President. They have also mentioned three alternatives for resolutions to the crisis proposed by some groups in Haiti (among the 30 they received) that are attracting their attention. They would like to see and encourage those groups to work together for a Haiti that could have one strong, effective and sustainable future.

On the other hand, a group of Dominicans close to those leaders organised a protest in front of the Haitian embassy in Santo Domingo and will continue to show more solidarity with the Haitian people.

Other initiatives are taking place to share as much information as possible by the government.

It seems Cyndy Kierscht, undersecretary from the American State Department, visited the President Danilo Medina this week to talk about the situation in Haiti and investments in DR. No more information was circulated or published after this visit.

Now, the big question from most Dominicans (the Dominicans I met) is this: how Haiti will get back to its feet considering the level of loss? They offer their prayers and positive thoughts.

To finish, our partners, Service Jesuit aux Migrants (SJM) and Groupe d’Appui aux Rappatries et Refugies (GARR) are asking the Dominican government to stop the deportations of Haitian migrants during this crisis as the Haitian authorities at the border doesn’t have yet the capacity to receive the repatriated migrants, particularly unaccompanied children. This deportation actions should be stopped, immediately. The Dominican Government should respect the right of the migrants, during the repatriations process and the Haitian government should be prepared to receive their citizen as well, in better conditions.

After the resolution of the crisis, it may be good to have a series of discussions between the two governments and the key actors involved in the binational issues for they could discuss on better collaboration on trade and commerce, climate change and environment, migration and deportation and create wealth for the most vulnerable and poor at the border areas in Haiti and in DR.

At the same time, they are asking for the different actors involved in the Haiti crisis to have a dialogue and seek for a solution to the crisis, immediately.

Prospery Raymond is an Agro-Economist, specialised in Economy and Rural Development and studied Law. He is the current Director for Christian Aid Haiti/DR programme (a British organisation) and the President of the Cadre de Liaison Inter-ONG (CLIO), a network of 75 local and international organisations in Haiti.

The article engage only the author!