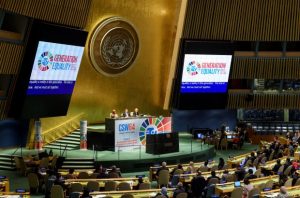 Opening meeting of the 64th Session of the Commission on the Status of Women (CSW) in New York City, March 9. The meeting was scaled down following the outbreak of the novel coronavirus, Covid-19. Photo: Loey Felipe/UN Photo

WACC and its Global Media Monitoring Project (GMMP) network have welcomed the Commission on the Status of Women’s (CSW) approval of a Political Declaration that recognizes the need to eliminate gender stereotyping in the media.

“We are pleased that specific references to women’s representation in the media have now been included in the political declaration,” stated Sara Speicher, WACC’s deputy general secretary. “This recognises the important role media play in shaping individual and societal norms and expectations. However, it is unfortunate that other critical issues, such as women, peace and security, are not sufficiently addressed. The inability to find ways to hold a broader debate and include civil society in the deliberations due to the cancellation of the side and parallel events is disappointing.”

Last week, WACC, the GMMP network and the Global Alliance on Gender and Media,  had expressed concern that the declaration’s final draft “omits a clear commitment to ending violence against women and sexual minorities in all spheres including the media offline and online,” and to “eliminating gender stereotyping in the media.”

The group had also urged the CSW to postpone approval of the declaration until later this year to ensure a broader and more democratic participation and deliberation. The 64th session of the CSW was scheduled to meet March 9 to March 20 in New York, but following the outbreak of coronavirus disease (COVID-19) the meeting was scaled down. A shortened “procedural meeting,” with New York-based delegations only, was scheduled for March 9 to adopt the draft Political Declaration.

Two clauses in the declaration approved March 9 now make reference to the role that a fair and balanced portrayal of women in the media plays in addressing structural barriers and discriminatory norms in society.

The final declaration adopted also now includes a clause on media on Section 12 (b): “Eliminating structural barriers, discriminatory social norms and gender stereotypes, and promoting social norms and practices that empower all women and girls and that recognize their contributions and eliminate discrimination and violence against them, including through their balanced and non-stereotyped portrayal in the media;”

In her opening remarks, UN Undersecretary and UN Women Executive Director Phumzile Mlambo-Ngcuka, brought attention to women’s lack of representation in various fields, including media, citing figures from the GMMP: “…73 per cent of managerial decision-makers are men, 67 per cent of climate negotiators are men, 76 per cent of the people who we see, hear or read about in our mainstream news media, are men and 87 per cent of the people at the peace table are men,” she said. “Even though we know that when peace settlements include women the negotiations and the outcome are more durable.”

These figures, she said, “show us that we have created a world where women are squeezed into just 25 per cent – one quarter – of the space, both in physical decision-making rooms, and in the stories that we tell about our lives.”

But one quarter, she stressed, “is not enough. Only half is an equal share, and only half is enough.” Women, she said, “want parity, not one quarter.”