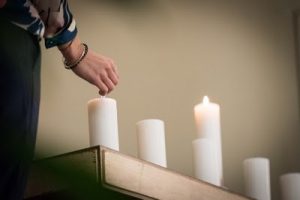 The following is the fourth in a series about the response of the WCC, member churches and all people of goodwill to COVID-19. The purpose of these stories is to share hopes, concerns and best practices among our one human family. – WCC director of communication Marianne Ejdersten

As the world grapples with the spread of the new coronavirus, churches are finding ways to continue their traditions, but now by virtual means. On the coming Sabbath, churches around the world will engage in prayer, not publicly – as the church moves out of big public buildings – but inside the private spaces of homes.

Christians who treasure the fellowship that goes with praying in public may have their reservations about the new virtual outlets. Still, there is also the radio for services, long used before the era of televangelists brought religion to the television.

It is, however, the new reality as it is necessary to fight the world’s common foe, the novel coronavirus, COVID-19, which on 19 March had exceeded 222,000 cases worldwide and claimed the lives of more than 9,100 people. Gatherings of people can easily spread the disease.

It is also impossible to have a one-fits-all virtual formula for church services for the world.

The likes of Zoom, Skype, WhatsApp YouTube, using the web and email take an even more prominent part in the lives of humanity, Christians, and the World Council of Churches family, at least for those fortunate to have such resources.

As far back as March, the Middle East Council of Churches secretary general, Dr Souraya Bechealany, said the council had decided to close its offices in Beirut and in the regions due to the number of COVID-19 cases increasing in Lebanon.

The decision was to stop all activities that comprised and addressed groups and contact with people.

Then, the chief secretariat of the Holy and Sacred Synod of the Ecumenical Patriarchate explained the new reality for Christians on 18 March.

“Today, we universally declare our ecclesiastical resolution and mandate to cease all divine services, events, and rites, with the exception of private prayer in churches that will remain open until the end of March.”

“This restriction will be later reassessed, in accordance with the development of the pandemic caused by the virus.”

Bishop Dr Heinrich Bedford-Strohm, chairperson of the Evangelical Church in Germany, the umbrella organization of Protestant and Lutheran churches, has launched a daily videoconference.

The Evangelical Church in Germany noted that in the time of the rampant virus, “The TV church service becomes particularly relevant once again. ZDF [a national broadcaster] has broadcast a church service every Sunday since 1986 with Catholic and Protestant services alternating.

“You can be there live, every Sunday at 9:30 a.m. Afterwards there will be a week of worship in the media centre to check. In addition, there are irregular live streams of local worship services in some congregations. We will keep you up to date here when these services take place,” said the Evangelical Church in Germany.

Turning to the Bible, the Church of the Brethren Newsline, on 17 March, noted that Jesus would withdraw to deserted places and pray.

Jesus in the desert

“But [Jesus] would withdraw to deserted places and pray…. [And] the power of the Lord was with him to heal,” (Luke 5:16-17) said the Church of the Brethren in its scripture reference for its March 16 meditation in “Holy Manna.” (The Brethren Press 2020 Lenten devotional.)

So, much more of our praying will be solitary or by distance until the world has found a way to deal effectively with COVID-19.

Science is also at work. The first vaccine trial for the deadly virus has begun, the World Health Organization (WHO) director-general Dr Tedros Adhanom Ghebreyesus said at a virtual press conference on 18 March. He noted that the trial had begun “just 60 days after the genetic sequence of the virus was shared by China.”

“We know the tremendous difficulties you face and the enormous burden you’re under. We understand the heart-wrenching choices you are having to make,” said Tedros.

Online encounters are a wonderful facilitator where the world is well- connected. But those who have the privilege of this will know that not the whole planet has fast broadband streaming, even in developed nations, where internet services outside towns can be slow.

Churches can still act in the name of the Lord in other ways that are not virtual such as the Protestant and the Roman Catholic churches in Switzerland calling, together, to light candles at the windows every Thursday until Easter, publicising the activity online.

The Most Rev. Michael Bruce Curry, presiding bishop of the Episcopal Church (USA) said, “It is important to emphasize that suspension of in-person gatherings is not a suspension of worship. I very much encourage and support online worship.”

He noted the Gospels, the teachings of Jesus about the way of love cluster during Holy Week and Easter (see John 13-17, Matthew 22:34-40).

“The primacy of love in the Gospels is given its fullest expression in the shadow of the cross. This way of unselfish, sacrificial love, the way of the cross, is the way of God and the way of life,” said Curry.

In South Korea, which was initially hard-hit by a virus, Rev. Dr Hong-Jung Lee, general secretary of the National Council of Churches of Korea spoke to the WCC. “Some churches prepare and air online worship videos (using YouTube, video chat, etc.) for church members to worship at home at a set time on Sundays, while others distribute worship-guidelines, and guide them to worship on their own at home or in small groups,” he said.

The Archbishop of Canterbury Justin Welby, the Anglican and Church of England leader said that the church was on 19 March to lead a national broadcast as the Church of England responds to the challenge of becoming a “different sort of church” in the face of the coronavirus crisis.

“The service, including prayers, hymns, and a short sermon, will be broadcast online by the Church of England and broadcast across 39 local BBC radio stations this Sunday as congregations across the country finds new ways of sharing worship after public church services were put on hold,” said the Church of England.

WCC resources on the coronavirus: www.oikoumene.org/corona

In South Korea, as church life goes online, ‘a church is a church for the world’ (WCC press release of 18 March 2020)

As world turns virtual during COVID-19 crisis, it is easy to pray (WCC press release of 17 March 2020)