A Lutheran World Federation delegation is present in Lima, Peru as government representatives from across the globe meet at the United National Climate Change Conference (COP20) from 1 – 12 December.

The LWF delegation to COP20 is comprised of seven young people from Canada, India, France, Norway, Sweden, the USA and Papua New Guinea. Delegates will participate together with NGOs and faith-based organizations in a number of events to call for immediate action to counter climate change.

On 1 December, the delegation participated in a large “Fast-for-the-Climate” event as they sat with empty plates in front of the conference canteen. LWF Youth Secretary Caroline Richter stated that “We are fasting here to be a voice for the voiceless those who are already suffering from the impacts of climate change.”

The Fast for the Climate campaign was launched by the LWF together with many other global organizations on January 1, following an initiative of the LWF youth delegation to COP 19 in Warsaw, Poland, in November 2013. It has grown into a global movement with the participation of youth, environmental and faith groups, who all want urgent action on climate change by governments this year.

On the eve of the first day of COP20, a Vigil for the Climate was held to mark the end of the one year Fast for the Climate campaign near the Pentagonito where the UN talks are to be held. Christiana Figueres, the head of the UNFCCC and Manuel Pulgar-Vidal the Peruvian Minister for the Environment and President of the UN meeting, spoke to the crowd and a symbolic lighting of candles began the celebration that marks the end of one year of monthly fasting.

1 December also saw the launch of a 365 day fasting campaign leading to COP21 in Paris in 2015. “We announced today how we will fast for the climate until Paris, COP 21,” said Caroline Richter. 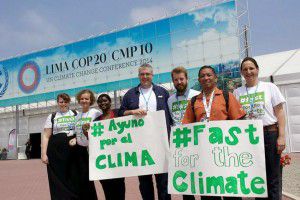 “We are launching a row of 365 fasters. One person will fast for a day for the whole day. It is going to be a journey from Latin America here in Peru to North America, to Asia, Africa and finally to Paris, where it will reach COP 21.”

The LWF has continuously called for policy makers to agree on measures that will have a lasting impact on climate change.

At the 2014 Council meeting in Medan, Indonesia, the LWF issued a statement urging “heads of state and key decision makers to make it a personal priority to address the human contribution to climate change, and make firm commitments for deeper cuts in carbon pollution.”

The LWF statement also asks political leaders to “ensure that the response includes provisions to assist the most vulnerable communities to adapt to the impacts of climate change already being experienced, and to account for the loss and damage being caused. Follow the LWF delegation and daily news from COP20 on Twitter: #fastfortheclimate, #LWFClimate and @LWFyouth; on Facebook: LWFforclimatejustice and fastfortheclimate; and on the LWF blog: www.lutheranworld.org