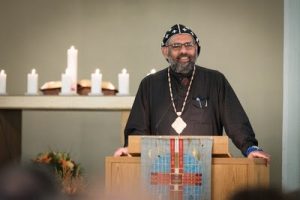 (WCC)– His Eminence Metropolitan Zachariah Mar Nicholovos of the Northeast American Diocese of the Malankara Orthodox Syrian Church celebrated his Episcopal Silver Jubilee, or 25 years in ministry, on 17 November. Metropolitan Nicholovos is a member of the World Council of Churches (WCC) Executive Committee. In an interview with WCC Communication, he reflects on his 25-year milestone, as well as on the challenges and joys of the ecumenical movement today.

Q: Congratulations on your Silver Jubilee! Have you been able to celebrate and reflect on this milestone?

Metropolitan Nicholovos: It has been very joyous but also very humbling. Five hundred people attended the celebratory luncheon. My ecumenical colleagues were there, and it was a great joy to be in their midst. It is hard to believe that it has been 25 years. At times it was a bumpy road but I am grateful to God for leading me onward.

Q: What has brought you joy as you have observed the collective church and the world over those years? What gives you sorrow?

Metropolitan Nicholovos: I would say the world as a whole has become more complex and we are facing a different set of crises. For example, the refugee crisis was not this bad 25 years ago. Now this has become an issue globally and an issue for the ecumenical world. The churches’ response has been something positive. Organizations such as the WCC and Church World Service have seriously taken notice, and that is good sign. Also, we are coming to terms with human sexuality and the whole “Me Too” movement. Women have come to acknowledge the fact that they have been abused. It’s time for them to speak up and society has taken notice of that. I come from India and, even in places like India, the “Me Too” moment is happening, and the Thursdays in Black campaign as well. Those are definite positives.

Q: You are clearly involved in a lot of ecumenical work. Has this always been the case?

Metropolitan Nicholovos: Because my formation was in an ecumenical seminary, I had an opportunity early on to study with people coming from different backgrounds. I have always worked with the ecumenical department of the church as a priest. Even now, as I am president of the Department of Ecumenical Relations of the Malankara Orthodox Syrian Church, I continue to be occupied by and involved with many different ecumenical aspects of the church. My friendship and my personal involvement with many ecumenical world leaders have also brought me into situations, for example, to the board of Church World Service. Finally, when you grow up in a country like India, simply living in India itself is an ecumenical experience!

Q: As one of the newest members of the WCC Executive Committee, what are some of your perceptions at this time?

Metropolitan Nicholovos: Rather than seeing the WCC from the outside, I am now part of the inner workings, and I am beginning to understand the complexities and difficulties of the challenges in front of us. I am also realizing how much the WCC has changed over its 70 years of existence. The challenge of the unity of the churches has become a global challenge.