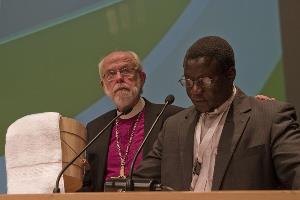 Reconciliation between Lutherans and Mennonites initiated at The Lutheran World Federation (LWF) Eleventh Assembly has brought the two traditions closer on peace issues and future cooperation, says the chairperson of the LWF Task Force on the Mennonite Action, Rev. Michael Martin.

At its third meeting, 28 – 31 July, in Utrecht, the LWF Task Force which forms part of the ongoing process between the LWF and the Mennonite World Conference (MWC), focused on the meaning of the 16th century Lutheran confessional writings in the 21st century, particularly those that had expressed historical hostility towards Anabaptists, who Mennonites regard as their predecessors.

“Both the future behavior of Lutherans with their confessional tradition and possible incentives for cooperation between Mennonites and Lutherans locally and in different regions throughout the world formed a key part of the discussions,” Martin said. “It was especially important that the Lutheran Task Force included Prof. Dr John Roth Goshen, a Mennonite member. This ensures that the continuing work of both Lutherans and Mennonites on the common path toward reconciliation is inextricably linked together.”

A report on the series of meetings between the LWF and MWC will be presented to the LWF Council in 2015 and will be linked to the 500th Reformation anniversary in 2017, including the principle of ecumenical accountability and being part of a broader “healing of memories” process with other Christian world communions.

Through the Mennonite action at the LWF Assembly in 2010, the LWF apologized for Lutheran persecution of Anabaptists in the 16th century, the ignorance towards these actions till the present day and for inappropriate and hurtful portraits of Anabaptists by Lutheran authors. The Assembly prayed for healing of memories and reconciliation between Lutheran and Mennonite sisters and brothers. The task force is seeking ways to implement the promises locally, regionally and globally, particularly in light of the Reformation anniversary.

The task force emphasized that reconciliation with Mennonites continues and that it will look at ways to nourish this in LWF’s pastoral training, and find opportunities to allow grassroots expressions of reconciliation, particularly during the Reformation anniversary in 2017.

Photo: During the Assembly 2010 reconciliation action, the Mennonite World Conference presented the LWF with a pine foot-washing tub as a sign of commitment to a continued process of healing of memories (LWF  Erick Coll)