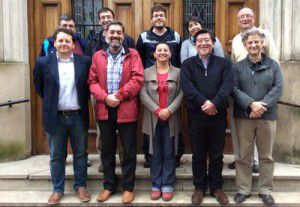 The theme “pilgrimage of justice and peace” has triggered robust discussions on furthering cooperation among Christian communication organizations in a seminar sponsored by the World Council of Churches (WCC).

The seminar was held at the biannual assembly of the Latin American and Caribbean Communication Agency (ALC) from 3 to 5 October in Buenos Aires, Argentina.

The call for a “pilgrimage of justice and peace” was issued by the WCC 10th Assembly in Busan, Republic of Korea, 2013.

Founded in 1994, ALC reaches some 10,000 readers daily through its news releases published in three languages and its social media outlets. The agency is currently striving to obtain financial support to continue working. These constraints were discussed at the ALC assembly. Rev. Leonardo Daniel Felix, director of the ALC, believes that the seminar was a “chance to envisage new possibilities of collaboration improving the quality of the materials produced by the ecumenical news agency.”

“We have discovered new prospects and potential for future strategic alliances with communication partners. Such alliances can enable new forms of mutual cooperation and wider coverage of themes that inform, raise awareness and improve advocacy actions undertaken by the churches and ecumenical organizations in the region,” said Felix.

The seminar, coordinated by Dr Marcelo Schneider, WCC communications liaison for Latin America, addressed how “a pilgrimage of justice and peace” can inspire communicators to enhance dissemination of news from the churches in Latin America and the Caribbean.

“The WCC’s communication references to the pilgrimage, as well as strategies used in social media, are extremely relevant for the communicators in Latin America,” said Schneider. “From the WCC communications perspective, our role is not only to get our news visible, but also to empower spaces where all of us can share our stories,” he added.

To engage local communicators in promoting a pilgrimage of justice and peace, a joint WCC-ALC collaboration was developed at the WCC Busan Assembly by the WCC communications director Mark Beach and the ALC director Rev. Leonardo Daniel Felix.

“This initiative was both a concrete contribution and an encouragement in strengthening Christian communications,” said Rev. Daniel Favaro from the Evangelical Methodist Church of Argentina. “This collaboration was of great help for us in finding unified criteria for sharing our content regionally with our ecumenical partners meeting requirements of media,” added Favaro, who is a WCC Central Committee member and ALC board member.

The ALC, which has recently launched a new website www.alc-noticias.net, is formed by the Latin American Council of Churches (CLAI), the Alliance of Presbyterian and Reformed Churches in Latin America (AIPRAL), the Regional Ecumenical Center for Advisory and Service (CREAS), the Lutheran Forum of Communicators (FLC) and the World Association for Christian Communication (WACC).