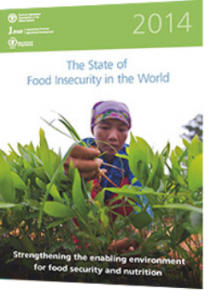 Latin America and the Caribbean is the region that has shown to most progress in reducing hunger, lowering the rate by almost two-thirds since the early 1990s.

This has helped to achieve the target set by the Millennium Development Goals (MDG) of halving the proportion of people in developing countries suffering from undernourishment before the expiration of the deadline in 2015, according to “The State of Food Insecurity in the World, 2014.”

The report was published Sept. 16 by the United Nations Food and Agriculture Organization (FAO), the International Fund for Agricultural Development (IFAD), and the World Food Program (WFP).

FAO Regional Representative Raúl Benítez said during the report´s launch in Santiago de Chile, “political compromise is fundamental to the eradication of hunger, and Latin America and the Caribbean are an example to the rest of the world of this compromise.”

That effort is demonstrated by the actions of the Community of Latin American and Caribbean States (CELAC), as well as by sub-regional organizations like the Union of South American Nations (UNASUR), the Southern Common Market (MERCOSUR), and the Caribbean Community (CARICOM), all of which made the fight against hunger one of their top priorities.

Although the number of undernourished people in the region dropped from 15.3 percent in 1990 to 6.1 percent currently, Latin America and the Caribbean continues to be the region with the greatest inequality in the world; women in rural areas and indigenous communities have the highest rate of poverty and food insecurity.

Benítez said the governments in the region, realizing that economic growth was not going to resolve the problems of inequality, implemented policies targeting the most disadvantaged sectors, including conditional cash transfers, school feeding programs and support for family agriculture.

Brazil was presented as an example to the world in eradicating food insecurity with the implementation of social programs like Zero Hunger and Bolsa Familia, or Family Grant, that have from 2002 to 2013 reduced by 82 percent its population living in hunger, lowered poverty from 34 percent to 15 percent, and decreased extreme poverty from 15 percent to 5.2 percent.

Bolivia was also among the countries that stand out for their efforts in the fight against hunger, with food security policies focused particularly on indigenous peoples that have achieved a reduction in hunger by 7.4 percent between 2009 and 2014. Chronic malnutrition in children under three years also decreased, from 41.7 percent in 1989 to 18.5 percent in 2012.

“This year we celebrate the regional achievements,” Benitez said. “The challenge ahead is to consolidate the gains, intensify efforts in lagging countries through regional cooperation, and learn from the experiences that have given the best results to build the road that will lead us to be the last generation to have to live with hunger in Latin America and the Caribbean.”

Photo: The State of Food Insecurity in the World 2014