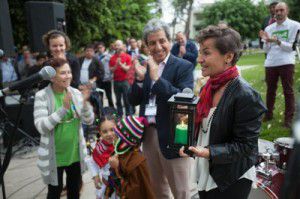 The members and partners of the World Council of Churches (WCC) are all set to promote the cause of climate justice from a faith-based perspective as the 20th Conference of the Parties (COP) of the United Nations Framework Convention on Climate Change (UNFCCC) beginning on 1 December in Lima, Peru.

COP 20 is another step in the long path to attain a just and ambitious binding instrument to replace the Kyoto Protocol (signed in 1997). It aims strongly to mitigate the greenhouse gas emissions and adapt to the already occurring, appalling, climate change scenario that is harming millions of human beings around the world.

Alongside COP 20, civil society organizations, networks, social movements, research centres and communities will be organizing the Peoples’ Summit on Climate Change. The event will be held from 9 to 12 December.

The Methodist Church of Peru (IMP), a WCC member church, is fully involved in the activities related to the COP 20 and the Peoples’ Summit. On 8 December, the IMP will promote “Methodist Day” – an initiative that will include workshops on practical issues such as the recycling of plastic and healthy cooking. Music concerts and theatre presentations will be offered at the occasion. The highlight of the programme is a panel on the theme “Caring for Creation” which will include participation of regional and international ecumenical organizations and churches.

Through its local member churches in Lima, the WCC is adhering to the religious programmes organized by the Inter-religious Council of Peru – Religions for Peace, based in Lima at the headquarters of the Secretariat and General Direction of Religions for Peace (RfP) for Latin America and the Caribbean.

On the first day of COP 20, the delegation of the Lutheran World Federation (LWF), formed by young adults from different parts of the world, held an event to invite people to pray and meditate for good outcomes from the conference. The event also showed support for the Fast for the Climate campaign, an interfaith initiative to build support for actions that counter climate change. The LWF is a partner ecumenical organization of the WCC.

A statement on climate justice from regional ecumenical organizations and churches will be finalized and shared with the delegates of COP 20 and the participants of the Peoples’ Summit. The document will highlight concern over the effects of climate change that have been impacting populations in Latin America in the recent years.

An official delegation of the WCC, formed by staff members, representatives of member churches and partner organizations, will attend the second week of the conference in Lima giving special attention to the continuation of work based on outcomes of the Interfaith Summit on Climate Change promoted by the WCC and Religions for Peace last September in New York.

Dr Guillermo Kerber, WCC programme executive for Care for Creation and Climate Justice stressed that “COPs are an opportunity to strengthen ecumenical and interfaith advocacy and to enhance the work churches are doing on environment and climate change”.

“Climate, Faith and Hope: Faith traditions together for a common future”, the final statement of the Interfaith Summit will be officially presented at COP20 on December 11th by the WCC delegation.

Statement from the Interfaith Summit on Climate Change 2014

WCC’s work on climate justice and care for creation