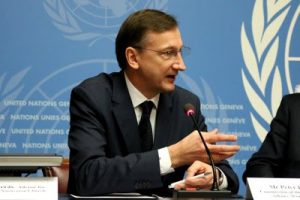 Peter Prove, director of the WCC Commission of the Churches on International Affairs. Photo; Ivars Kupcis/WCC

WCC-The World Council of Churches (WCC) and the International Jewish Committee for Interreligious Consultations (IJCIC)  met formally on 25-27 June in Paris, under the theme “The normalization of hatred: challenges for Jews and Christians today”. This meeting took place at a time of significant challenges in public and religious life for many communities around the world. At the meeting Peter Prove, director of the WCC Commission of the Churches on International Affairs, presented the WCC policies on antisemitism and the WCC’s work for human rights for all. The WCC News met with him after the meeting.

Q: You have spoken and written about antisemitism from a human rights perspective. Can you give your own brief definition of antisemitism?

Mr Prove: Antisemitism is the hatred of Jews as Jews, which had its most appallingly extreme expression in the Holocaust.  But more recent attempts to further define the term have generally raised concerns about the potential misuse of such definitions to falsely characterize legitimate criticism of specific policies and actions of the government of Israel as antisemitic. I am therefore of the view that it is better that we work together in confronting hatred in the real world situations in which people experience it, than to labour mightily for a perfect definition in such a contentious context.

Q: How did the founding assembly of the WCC in Amsterdam in 1948 address antisemitism?

Mr Prove: In August 1948, just a few months after Israel declared its independence, a report entitled “The Christian Approach to the Jews” was received by the WCC’s first assembly. That report contains the oft-quoted declaration which has had considerable influence in the WCC’s constituency and the wider Christian world: “We call upon all the churches we represent to denounce anti-semitism, no matter what its origin, as absolutely irreconcilable with the profession and practice of the Christian faith. Anti-Semitism is sin against God and man.”

Q: Can you give a recent example of how such a denunciation is still articulated by the WCC today?

Mr Prove: This condemnation tragically had to be quoted in response to the October 2018 attack on the Tree of Life synagogue in Pittsburgh, the deadliest attack on Jews in USA history. In his message issued immediately after that attack, WCC general secretary Rev. Dr Olav Fykse Tveit stated: “The WCC denounces all violence based on religion, ethnicity, race or any other dimension of a person’s identity or belonging, and this attack upon a Jewish community in a place of prayer and during a moment of celebration of their religious identity is an appalling violation of our shared humanity.”

Q: What do you believe is the true core issue?

Mr Prove: It is the universality and equality of human rights. All human rights – including rights to life, freedom from torture, equality before the law, freedom of movement, a nationality, freedom of thought, conscience and religion, freedom of opinion and expression, freedom of peaceful assembly and association, to take part in the government of one’s country, to work and to just and favourable conditions of work, to health, to education, and yes, to self-determination… for all, regardless of race, religion, gender or any of the other usual criteria for discrimination. Together with the principles of our faith, these principles undergird our condemnation and rejection of antisemitism, just as they do our support for the dignity and rights of Palestinian people.

Speech by Peter Prove, director of the WCC Commission of the Churches on International Affairs at the IJCIC-WCC meeting