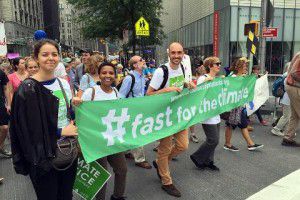 A delegation of young Lutherans representing the Lutheran World Federation (LWF) will continue to advocate for climate change as a “matter of social and economic justice” at the United Nations Climate Change Conference in Lima (COP 20) 1-12 December.

The LWF delegation of seven young people from around the world will also take part in the monthly “Fast for the Climate” campaign on 1 December, the opening day of the conference, and a candlelit vigil outside Pentagonito on 30 November aimed at bringing the Fast for the Climate message to the streets of Lima. The delegates come from Canada, India, France, Norway, Sweden, the USA and Papua New Guinea.

The Fast for the Climate campaign was launched by the LWF together with many other global organizations on January 1, following an initiative of the LWF youth delegation to COP 19 in Warsaw, Poland, in November 2013. It has grown into a global movement with the participation of youth, environmental and faith groups, who all want urgent action on climate change by governments this year.

The fast was inspired when the Philippines negotiator, Yeb Saño, whose own family was caught up in Typhoon Haiyan, stopped eating to express his solidarity with those affected and to demand faster progress in the negotiations.

LWF General Secretary Rev. Martin Junge has expressed hopes that the COP 20 talks in Lima will lay the foundations for a binding international agreement ahead of the UN Climate Change conference in Paris next year.

At the 2014 Council meeting in Medan, Indonesia, the LWF issued a statement urging “heads of state and key decision makers to make it a personal priority to address the human contribution to climate change, and make firm commitments for deeper cuts in carbon pollution.”

The LWF statement also asks political leaders to “ensure that the response includes provisions to assist the most vulnerable communities to adapt to the impacts of climate change already being experienced, and to account for the loss and damage being caused.”

“If we act now it will still be possible to keep global warming below the internationally agreed danger-threshold of 2 degrees Celsius. To achieve this, carbon pollution must be reduced quickly; and climate change is a matter of social and economic justice, as it most affects the poorest people and displaces the most vulnerable,” the LWF Council stated.